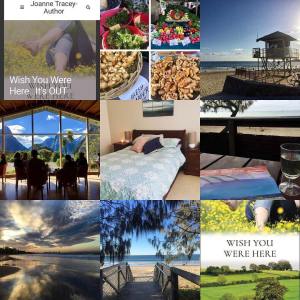 It’s felt, over the last week, as though I’m the only one in Sydney not on holidays. I know that’s not true, but that’s how it’s felt.

Oh, and that’s not necessarily a bad thing either – in fact, it’s a bit of the opposite. Let’s just say that is Sydney was like this all the time – well, except for the stinking heat – I’d probably be thinking that I’d miss her more.

For a start, the roads were quiet. My morning commute normally takes me just under 90mins. This week? An hour. In fact, the roads were so quiet that the bus driver had to loiter at the stops in order to be on time.

Even the afternoon commute was better – again, home in just over an hour. Gotta love that.

Then there was the bus itself. Sure it was still busy in the afternoon – but with chatty people coming home from city shopping and beach days out rather than grumpy office staff – but in the morning? Chauffeur driven, my friend.

It was even better at lunchtime. Sure, down my end of the city (Wynyard end) most of the offices were closed – and many of the food outlets took the same opportunity to have a break – but instead of squeezing through the crowds, there were plenty of seats available. Plus, I could linger over my lunch and read my book without being glared at by whoever was wandering around balancing their plate looking desperately for a spare seat.

Then there was the office itself. Aside from being quiet, there was a camaraderie between those of us left on the floor – as if we were the only ones in the entire world not posting instagram pics from a beach somewhere.

Anyways, what else this week?

I vowed a long time ago to never read another diet book in my life. I broke that promise to myself this week when I devoured Peter Fitzsimon’s Great Aussie Bloke Slimdown. I’m sure that I’m not his target audience – it’s unashamedly aimed at Aussie men 40-60 – but man, he could have been speaking to me. He certainly speaks my language. I had more light bulbs go off reading that book than I reckon I had in all of 2016.

Everyone preaches moderation – and I get that’s something we probably should be aiming for. In fact, I remember reading or hearing something a few years ago (probably back when I had a go at the Michelle Bridges 12 week thing) that immoderation was a sign of immaturity. But I’ve always suspected that some of us simply aren’t wired to be moderate. And that was one of his key messages too. That maybe rather than trying to be something that we’re not, we take that and turn it on its head. I really get that. Of course, he had a lot more to say than that – mainly about sugar and alcohol – but that was my key takeaway. Geddit? Anyways, I’m so inspired there was a weight loss goal and number in my 2017 resolutions. Excess Baggage be gone.

What I also read…

I’m trying to read more cozy mystery this year – partly because I want to have a shot at writing it. First up this week was Death at Wentwater Court by Carola Dunn. It’s the first in a series of 22 (yes, you read that correctly) Daisy Dalrymple mysteries set in 1920s England. Daisy is a society girl, but also a freelance writer for Town and Country magazine. It’s quite chocolate box England, with a touch of Downton Abbey, but with much more toodle pips and jolly hockey sticks. I’m not yet sure how far I’ll go into the series, but for now it’s like a sweet treat I suspect I’ll find cloying.

I’m so into Shetland – on Netflix – right now. It’s a crime series set in, wait for it, the islands of Shetland in the north of Scotland. It’s broody and fabulous, with light relief provided by Tosh, DC Alison MacIntosh. I’ve always thought I’d like to visit up there, but this has reinforced that. Shetland is definitely moving up the where I’d like to go to when I can afford it bucket list.

Heaps. Mostly end of year closing ceremony stuff. I also spent most of Friday scheduling posts for the author site, and the astro site.

What I didn’t write…

Any words at all for I Want You Back. In fact, I haven’t even opened the scrivener file since Milford. Yes, really.

For a start, I probably won’t see it in – I rarely do. The plan is dinner at the local club with friends followed by bubbles and wisdom on either ours or their deck. I’ll probably drift off to bed at 10ish and get woken by the thud of the city fireworks on the stroke of midnight – at which time I’ll stagger out and mumble happy new year to my Scottish born husband who is astounded at my lack of interest in new year. Or, I could surprise myself and last the distance…or end up dancing wildly on a collapsing table. Who knows?