A few years ago, on a weekend trip to Wellington, my friend and I declared- after imbibing in a bottle of NZ courage- that we’d enter the Blackmore’s Bridge Run and learn to, well, run. Her husband was entered in the marathon on the same day and it seemed like a good idea at the time. By the second bottle, we’d moved past good idea territory and were well into ‘seriously, how hard could it be?’

What followed was a few months of hell as I discovered (painfully) just how hard it could be! My BMF was training for a different marathon and selflessly offered his services as trainer. Most Fridays one of us would park up at the Riverstone turn-off, and the other would pick up and drive us both down to the Clarendon display homes at Sunnyholt Rd in Parklea. Then we’d do the walk-run thing up Windsor Rd to the others’ car. Complicated, but surprisingly effective. We named it the Knackery Run.

At first, there were arguments- lots of them. Usually ending in me threatening to jam his watch (‘run for 2 minutes and walk for 2 minutes) somewhere that watches don’t normally fit; and him standing on the side of the road, laughing at me and watching me wave my arms around and yell expletives at him. Passing traffic must have found the scene hilarious. If this sounds familiar, it’s because I used it for inspiration in the one and only scene in Baby, It’s You when Em attempts to run.

As boring as the route was, it had it’s advantages:

It’s why when I reached the stage of my preparations for Milford Track where I needed to be clocking up the kilometres- with a back-pack- that I gritted my teeth and started walking. Boring? Absaflippinglutely. About as exciting as watching paint dry. So boring that I almost missed my BMF and his annoying watch.

And yes, before you write to me, I know there are some fabulous walks around Sydney- especially on the coast- although from our house in suburbia, most take about an hour to drive to. For a three hour walk, I’m committing to at least five hours away from my desk- including travel. Sadly, my weekend schedule is such that I have to grab a few hours here or there in order to get out and about- so that means training close to home. I am, however intending to schedule a whole free day to do The Spit to Manly walk…watch this space.

I parked at Ettamogah Pub, and started trudging. I was targeting 14kms, so walked 7kms in one direction, and turned around and walked 7kms in the other direction.   My total was just shy of 14kms (because I accidentally pressed finish on Map My Walk when I was trying to reply to an instagram post), but you can make it as long or as short as you like.

Easy. This would get the one boot rating in terms of difficulty, earning extra boots for long kilometres.

Aside from boredom and remembering to walk on the left side so you don’t get ridden over by cyclists…no.

The path is a fairly wide one- designed for walkers and (in some sections) cyclists.

Leashed only, of course. Windsor Rd is humungously busy. Besides, even the dog would get bored on this one.

Where do I start? Depending on where you start, you can check out the progress on the rail line.

or maybe the billboards further down… 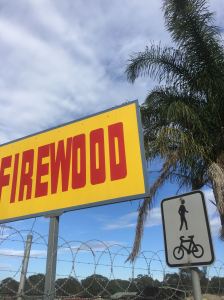 What about flora or fauna?

The native weeds are all in flower at the moment.

Other than that? Sorry…

You can always stop in at Rouse Hill shops, or the Mean Fiddler on the corner of Commercial Road.

Sorry, no good reason…unless you need some measurable kilometres close to home on relatively flat surfaces.

Rouse Hill House and Farm is absolutely worth packing a picnic and visiting. It’s a living museum and there are acres of grounds for kids to run around in.

I managed my 14kms relatively easily. Of course, doing it off-road will be different again (as will be backing up a few days in a row and climbing), but the aim was to stay upright and just keep going.

In other news, if I hadn’t done this walk, I wouldn’t have known that Mi-Sex were playing at Ettamogah on the first weekend in November. Man, I used to love that band: …but you don’t care- you just don’t care…and if there ain’t no feeling there, I guess you don’t care…