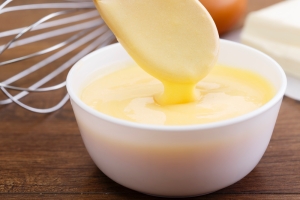 Try as I might whenever we’re out for breakfast or, for that matter, brunch, I can’t seem to resist the eggs benedict. To me, it’s the one dish a café’s breakfast should be judged on.

Sure I’m partial to a smashed avocado on toast, but that’s so easy to do that at home that it’s become almost pointless to order when out. A good eggs benedict though? That’s a thing of beauty – even if my tummy rebels at the very thought of it these days…but enough about my digestion.

The thing with a good bennie is that you can’t make it at home unless you’re prepared to make your own hollandaise – and why would you do that when:

Sure, you can buy hollandaise in a jar or one of those packets that finishing sauce comes in and, you know what, that stuff isn’t bad. But it’s not hollandaise, not really. There’s still the faint taste of preservative.

Despite loving the humble bennie, and despite believing that there is very little in the culinary world that is better than dunking a spear of asparagus into fresh hollandaise sauce – other than perhaps dunking a spear of asparagus into a soft boiled egg – I’ve somehow managed to avoid attempting to make the real thing. I think it’s all that incessant whisking that has turned me off. It’s certainly not the butter.

It’s not that I haven’t made hollandaise sauce – there is, after all, very little in the culinary world that can beat fresh hollandaise drizzled over pan-fried salmon. And yes, I know that already said that about asparagus. I haven’t though made it entirely by hand. There’s a Delia Smith recipe that I’ve been using forever and a day where not only the processor is used, but you also use the egg whites to turn it into a foaming hollandaise. If you’re interested, Delia’s recipe is here.

The main problem with that recipe is that it involves getting the food processor out and as dearly as I love my Kitchenaid processor it’s flipping heavy and a pain in the neck to wash and dry. Plus you don’t get the bragging rights that you do from the real hand whisking version.

Delia’s recipe does, however, have two “advantages” other than using the egg whites:

Besides, this challenge is about cooking my way through Nigella’s How To Eat…not Delia Smith’s backlist of books (although I could do that as well, just saying #cookbookqueen).

Okay, onto the recipe – which does involve whisking by hand – which really doesn’t hurt you every now and again – and is much quicker on the clean-up.  Plus, it tasted really, and I mean really, good. Groan out loud good. Too much information?

All you need are:

I don’t have one of those fancy pants bain-marie style set-ups so put the egg yolks into a wide stainless steel bowl set over a saucepan of water – making sure the bowl and the water weren’t actually touching.

Place the pan on the heat and start whisking the egg yolks. Once the water has come to a boil reduce the heat so it’s barely simmering and start whisking in the butter – one cube at a time. By the time all the cubes have been added the sauce should be thick and luscious. Still whisking, add the lemon and the salt and pepper.

If you’re not using it immediately, ie if you have eggs to poach or salmon to fry or asparagus to steam, you can pop the bowl over a pan of tepid water – this time with the base of the bowl submerged – and whisk it firmly again before using.

My sauce didn’t split and despite the manual labour involved, to be honest, the biggest issue I had was whisking fast enough so that the butter didn’t melt before I could toss it in – even though I had the air-conditioning on. This is, after all, summer in Queensland.

I served it with asparagus spears and broccolini that I’d cooked for just a few minutes – almost blanched, I suppose. And it was incredible.

Is hollandaise worth making by hand? The taste is definitely better than that you get in a jar but in balance? Probably not. Aside from the fact that, on account of that much butter, it’s a heart attack in a bowl, it’s one of those things that’s more special because you don’t have it often. Besides, it involves a lot of whisking. But man, it was good!

I’ve taken on the challenge of cooking my way through Nigella Lawson’s How to Eat. You can find other episodes here.

Winter in Queensland…. #thebigblue #herveybay #herveybaymarina
Sunrise, a cup of tea, an (early read) of a good book & the sound of waves against the rock wall. Sunday morning in #herveybay
Yeah… not too shabby… another glorious morning at the bay…. #herveybay #urangan
No walk this morning. I had my first covid vax yesterday & while I’ve pulled up ok, the 4.30 alarm was just a step too far. Instead you have @adventurespaniel behind a curtain in the sun. Happy Friday.
A front row seat to a pretty fabulous show this morning… #mooloolababeach
It must be Wednesday… and it’s a busy one, beginning with round 2 of drilling and filling… ugh 🙄 On the bright side, I also have some writing scheduled in, so it’s not all bad.