We had some friends coming up from Dorset to see us for the day. The type of friends where even though we hadn’t seen them since they left Australia four years ago, we could still pick right up with. There’s been a bit of that this trip. Anyways, they were coming in for the day on the train, so we met them at Waterloo. Of course, I only told you that part so I could put up the pick with the tube station on it. And so I could sing the song.

We took them back to Borough Markets and managed to find that little pub I told you about down there- Mug House. Remember Day 3? I only told you that part because I felt like such a local. Borough was mobbed. Chaos. Ugh. Instead of fighting the crowds, we waited for the pub to open…as you do.

By the time we dragged ourselves back out again it was dark.

We’d planned to do a Jack the Ripper walking tour from Tower Hill, so rather than catch the tube, we walked across the bridge and down the Strand and Fleet Street (yes, I think we’ve pretty well ticked off the whole monopoly board except for the purple places- Whitechapel, Old Kent Road and …. I can’t remember the last one…). We walked past Temple Bar, the banking district, the justice district.

Along the way we passed multiple groups of (mostly) lads in Santa costumes, or variations thereof. As Sarah said, she’d never seen so many drunk Santas in her life. We’d seen groups of Santas on cycles that morning near Waterloo, but hadn’t thought too much of it- after all, last weekend in Devon we’d seen at least four official Santa fun runs.

It turns out that Saturday was Santa Con 2015- a sort of convention for people dressed as Santa. There’s a website, but many of the Santas we saw had obviously not read the rules. This guy we saw on the tube on the way back had taken the stylish three piece option- pants, jacket, tie- and was not at all messy. A credit to the profession.

Along the way we also dropped in at Somerset House to have a look at the ice-skating. 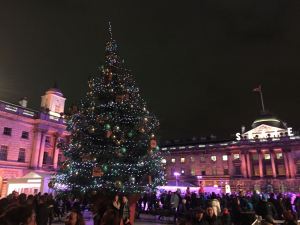 This is just one of a few ice-skating rinks set up in the city. There’s another in Hyde Park, another in front of the Tower, but this is arguably the most beautiful. 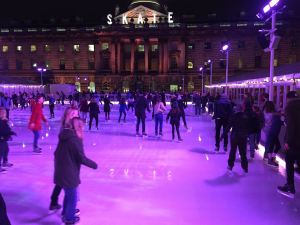 By the time we finally reached Tower Hill, the idea of another two hours walking was too much for all of us. So we took grainy night photos instead and headed back to Victoria for pizza and pasta from Sicily, the Italian just a couple of blocks from our hotel. Much less scary.

Not sure where this fire was - put near the cane fields near Maryborough maybe? It made for a spectacular end to the day… #sunset #herveybaymarina
Breakfast in the sun.
A couple more - just because it’s Wednesday. As I was having my coffee this morning I was listening to a few older men chatting. One said, “we don’t know how lucky we are to live here.” The others agreed.So do I. I’m so lucky to be able to visit as often as I do, and scenes like this are worth setting the alarm and walking for.
Walk done, coffee underway. It’s a partly cloudy start to the day, but for me it’s a scheduled writing day & I haven’t had one of them for a few weeks. So looking forward to getting back to it.
Quite warm here this morning - 18 at 6am. And a tad on the humid side. Loving the cloud action though… happy Tuesday. #uranganpier
And another - because it’s Monday #shareyoursunshine