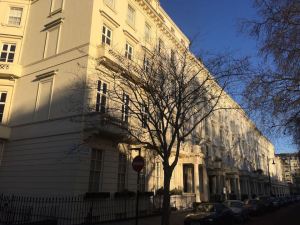 ‘Is there going to be much walking today?’

We were all feeling just a tad footsore, but it was Sares who asked the question as we stepped out into the sunshine to head down to the tube.

‘As far as yesterday?’

This morning we were off to Borough Markets. This place was on top of my ‘must do’ list, and it didn’t let me down…but I digress.

We’d arranged to meet F at London Bridge. ‘At the Shangri-La entrance at the Shard,’ she’d said.

I’d agreed. How hard could it be? The Shard stuck up into the air so far that you couldn’t miss it. That is, unless, you catch the tube to Tower Bridge (Tower Hill tube) rather than London Bridge. A small but significant detail that left us on the opposite side of the Thames from where we need to be.

On an upside, it meant we got a pic of the Naval Memorial on Trinity Green in the sunshine 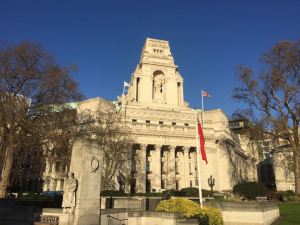 and the same of the Tower. We were intending to visit tomorrow, but rain was forecast. 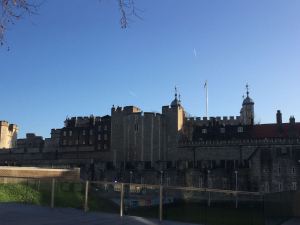 So, it was back to the station, westbound one stop on the district/circle line to Memorial, and then a change of lines southbound to get us another stop to London Bridge. And there it was- the Shard, in all it’s glory. 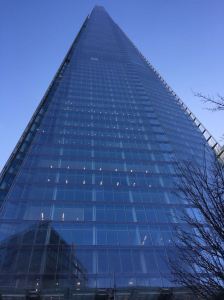 You can go up to the viewing platforms on floors 68, 69 and 72, but it will cost about 26GBP. Alternatively, you can dine at one of the restaurants up there, well, not as high, but you get the idea. It will still cost about 30 GBP a head, but you’ll get good food as well.

We weren’t there for the view, but rather for the food down in Borough markets.

This place is foodie heaven. We started with a sample from Drunk Cheese- because all good things should be aged in alcohol…I couldn’t agree more… 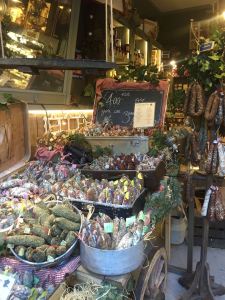 and here some French cheeses- including a raw milk gruyere that tasted so much better than cheese should be allowed to taste. 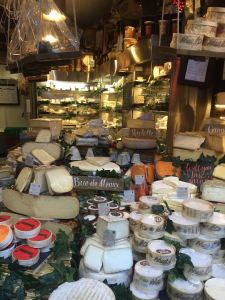 We sniffed at truffles, sipped at mulled wine, sampled local gin, and nibbled on gnocchi.

By 11am we were having a memorable oyster and prosecco moment, sharing 6 oysters between the three of us, F and I having ours with bubbles. 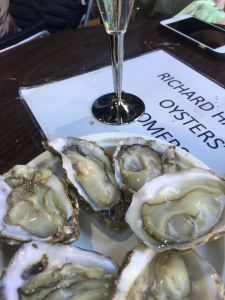 By 11.10, we were back for another 6. The oysters are wild caught off an island off the east coast, and then purified in clean water, before being brought in fresh that morning. 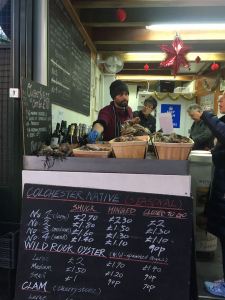 Sares opted for a macaroon instead. 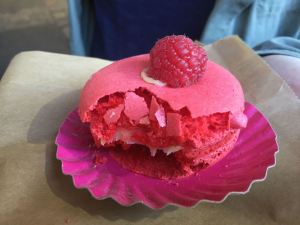 Everything doesn’t just taste good, it looks great too. Like this flower stall… 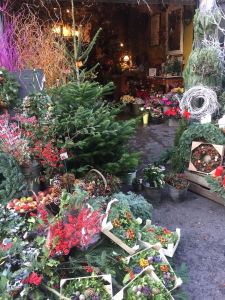 and these purple cauliflowers… 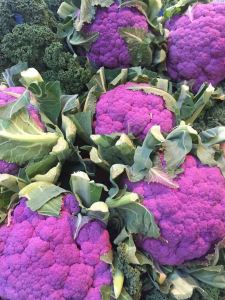 or these heirloom tomatoes… 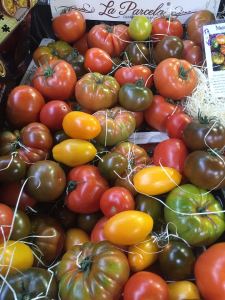 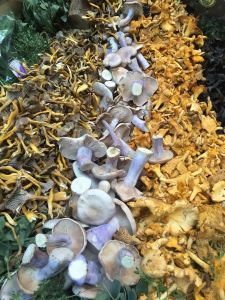 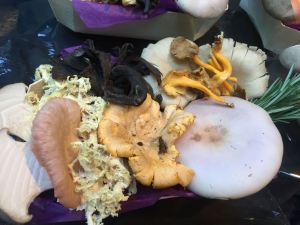 or even these squashes. 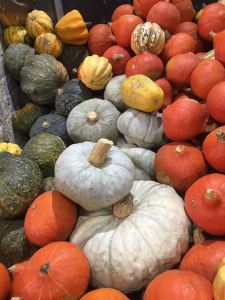 It’s not just about the produce either. You can buy a meal and eat it walking around, or sitting at the tables overlooking the markets. There are giant pans of paella, places selling burgers, noodles, mac cheese, vegetarian, and pretty well every other cuisine you can think of. 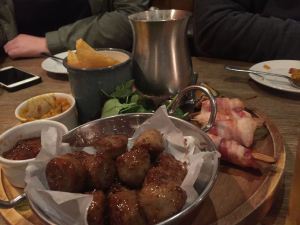 We couldn’t decide, and needed a sit down by now, so opted instead for a meaty share plate in a tiny pub hidden under the arches of London Bridge. 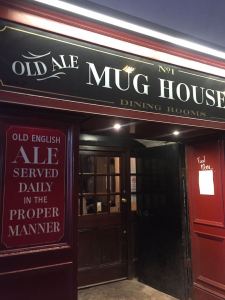 Oh, before we left Borough, we had a royal sighting in a motorcade- Prince Charles.

To get to Borough Markets, take the tube on the Jubilee or Northern lines to London Bridge. 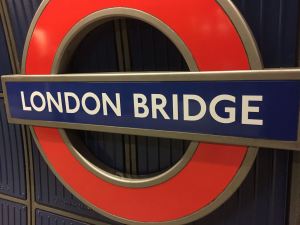 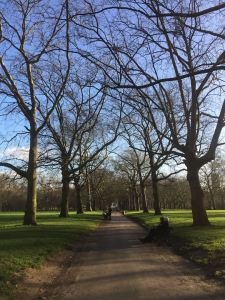 and wandered up to Knightsbridge 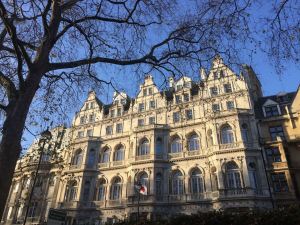 for a look at how the other half shop in Harvey Nicholls and Harrods. Sweetie, sweetie, darling.

Available in gin or whisky, this is my idea of an advent calendar! 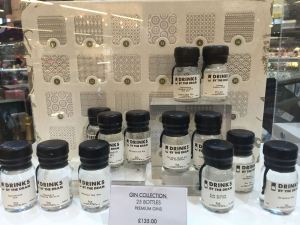 As for Harrods? We went looking for Christmas decorations hidden behind halls containing millions of pounds of items that we gingerly passed, holding our breath in. Sarah found a gilt eagle that could be yours for a mere 77,000GBP. My personal favourite was the silver tray shaped like a lobster for serving, wait for it, lobster. Just 2,500GBP each. 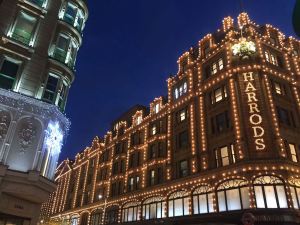 We got out of there and recuperated with a cup of tea and a scone across the road…before taking some more photos and walking the 2kms back to our hotel. 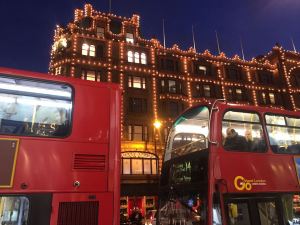 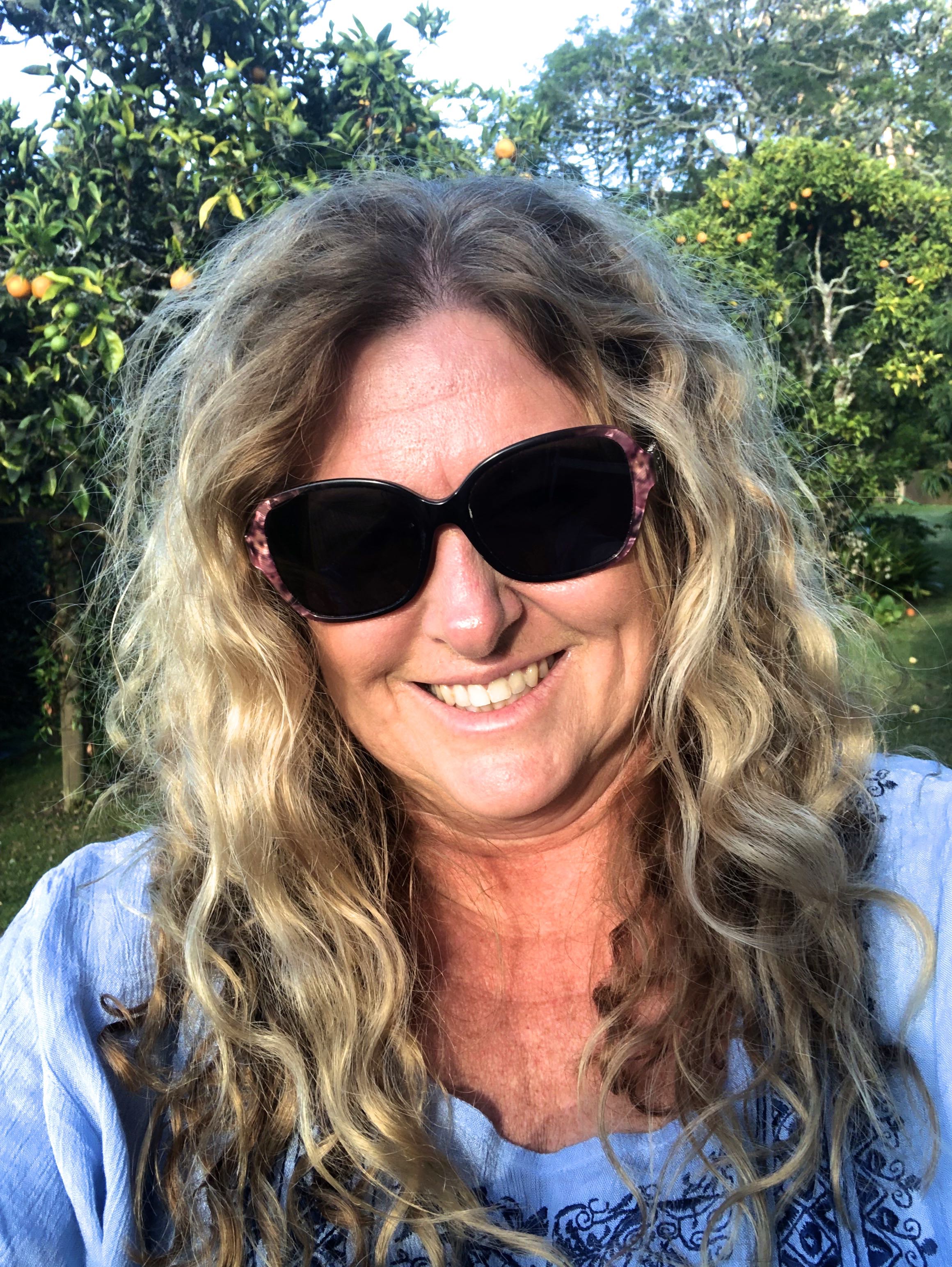