We didn’t mean to go back to Bali Asli this trip- it just sort of happened.

We were originally planning on going to the temple on the lake- Pura Ulun Bratan, on the shores of Lake Bratan in the mountains near Bedugul. When we consulted the maps, though, to get there would involve us going almost all the way back down towards Denpasar, to head north again, and vice versa to get home. It would make more sense to do it as a day trip from Legian. Instead we decided to head South East- which is how we ended up back at Bali Asli for lunch.

As we drove in we watched an old man walking his cow up the road. Apparently it’s something he likes to do everyday. 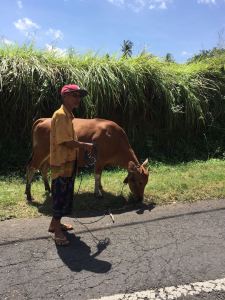 Not a lot has changed: the veggie garden is more prolific

and the view from the loo is a little more overgrown.

The views, though, are as they were,

and the peace and quiet is as it always has been. There’s no hum of electricity, just the gentle tinkling of water and the rhythmic chime of the gamelan. 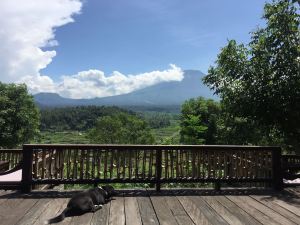 I’d been salivating over the welcome drink- so thankfully this too was a constant. Made from salak poached in cinnamon, star anise and goodness knows what else, it’s the ultimate in refreshing. Salak is the Balinese word for a fruit more commonly known as snakefruit- because it’s skin looks like that of a snake. Inside it has the consistence of an apple and the taste of a pear.

The menu was “written” on palm leaves using a traditional manuscript technique known as lontar, and dramatically presented in a wood box. 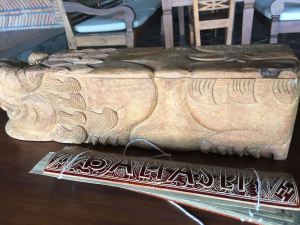 It’s not so much what we’ll be eating as a story: about where the food comes from, who grew it, who caught it. 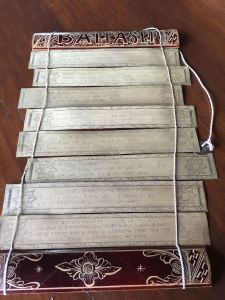 We ordered the Bali Asli Megibung- where side dishes for all to share are arranged around a central pillar of rice. I also chose a cocktail appropriately named “Eye of the Dragon”- a concoction of arak and lychee- while hubby experimented with a salak beer that he pronounced refreshing but otherwise “meh.”

We start with mixed crackers- some vegetables (sweet potato and cassava, I think), some prawn- and sambal. 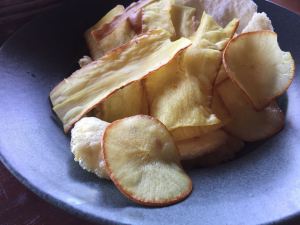 There’s sambal goreng (a fried sambal), my personal favourite sambal matah ( a raw sambal containing shallots, lemongrass, chilli, belacan), and another that I didn’t quite catch the name of. 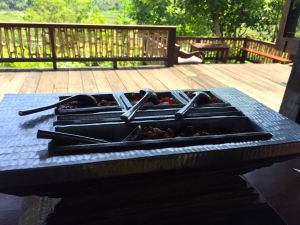 Next up was a soup made from sweet corn, young coconut and the leaves from the kelor tree. Legend has it that if you’ve been practicing black magic, eating kelor leaves will make you violently ill. Medicinally, the leaves apparently help with blood glucose and blood pressure levels and help new mothers with lactation. Just saying. 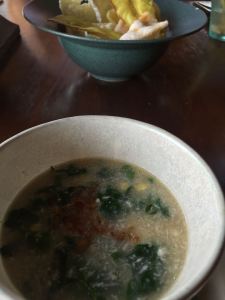 Following the soup, the platter, “gibungan”, was presented to the table.

Todays was similar to last time and held (apologies in advance if I get the spelling wrong!):

Salad of young papaya with grated coconut and Bali lime. This was my favourite dish of the day.

Organic chicken marinated in garlic, turmeric, ginger and lime, and poached in coconut sauce. Hubby commented that most chickens you see in Bali are organic…

Also on the platter was the ubiquitous Sayur Urab.

Just when we thought we couldn’t eat any more, a plate of fruit and sweets was brought out. 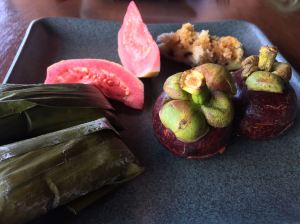 Bali Asli…make the trip- it’s so worth it. Just remember to allow more time than you think you’ll need, take the directions from the website, and be prepared to get lost…it’s all part of the adventure.

Oh…the details? Bali Asli is located in North East Bali, near the town of Amlapura in Karangasem regency. Allow about 2 hours if you’re coming over from Kuta and Legian, or 30 minutes if you’re staying around Candidasa. Leave your accommodation and make a day of it- there’s plenty to see over this side of the island.

How to book? I generally just send through an email. Make sure that you let them know if you have any dietary requests, but these guys are pretty adaptable… They also offer cooking classes and other experiences, so check out the website. 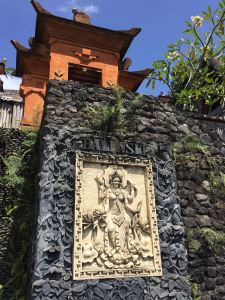 6am Tuesday & the humidity is off the scale… summer is well & truly here.
And just like that it’s Monday again…& a very humid Monday it is… #mooloolababeach
Hello Friday! I can think of worse places to be at 6 am… #mooloolababeach
Just. Look. At. That. #mooloolababeach
It’s been a while between bakes (& oh how I’ve missed it) but here’s my first attempt at Eccles Cakes… I still have a bit of work to do, but not bad for a first attempt. #ecclescakes #brookfordkitchendiaries #bkd
Flame Trees and Jacarandas… love the colours at this time of the year…