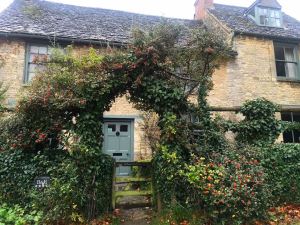 Digby the dog was circling- not for food, like what our Kali does, but around and around and around the floor in an anti-clockwise fashion. Kali does the same- just not aimlessly with a toy like Digby was doing. Kali’s circles are clockwise- and are usually for food.

Sally Wyatt, the proprietor here at Star Cottage, Burford, and Digby’s owner, speculated that the difference could be a hemispheric thing- like how the water goes down the plughole in a different direction at home. She also thought it could be a leftover from the genetic nature to herd. Perhaps it was- now it’s about circling with something in your mouth.

Apparently there’s a difference between English Cocker Spaniels (like Kali) and those bred for field-work (like Digby). There’s an even bigger difference between English and American spaniels- but that’s a different story entirely. Spaniels like Digby were bred to work as gun and bird dogs. Kali work? Perish the thought. Like Kali, he has a soft mouth and can carry something for ages without causing any damage.

Digby is just one of the star (get it) attractions in this gorgeous B&B.

At first glances (it was getting dark when we got here- thanks to a longer than expected delay at Heathrow…more on that below), this has to be one of the most naturally beautiful towns I’ve set foot in. There’ll be more pictures when it’s daylight and we explore.

Sally and Peter Wyatt’s Star Cottage (so named by the star on the outside- yes, I’ll take a photo) is just 10 mins walk from Burford. It’s country quiet and tastefully perfect.

On the walls are Sally’s paintings- they’re well worth a look, she’s one very talented lady. On the windows are Sally’s patchwork curtains, and in the sitting room are Sally’s upholstered chairs- almost too beautiful to sit in.

Peter’s specialities are breakfasts- the smoked trout and scrambled eggs is truly decadent. 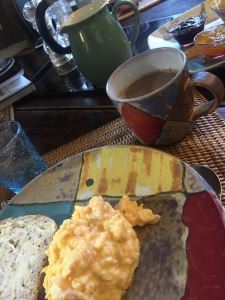 Speaking of brekky, it’s taken downstairs and is just perfect to start a day of Cotswolds exploration…more on that tomorrow.

Our room is plenty large enough for the three of us and, even without needing to light the fire, pleasantly warm. The beds- one large double, and a single- are piled with fluffy white quilts and, after 30 odd hours of travelling, are blessedly aaaaah and blissfully quiet.

The bathroom is just as beautiful as the room, with plenty of hot water and enough pressure in the shower to satisfy two long-haired women (i.e. Miss 17 and I…). Trust me, when you have hair this thick, decent water pressure is a luxury that doesn’t go unnoticed!

The bathroom looks out to a cute tittle garden that would probably be lovely at a warmer time of the year. 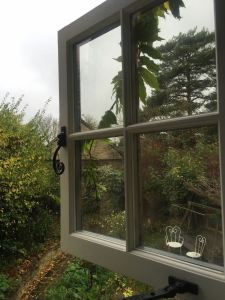 To shake off the traces of travel fug, we walked the short distance into town last night- stopping off at the Carpenters Arms for a quick pint, and then across the bridge, and up the High Street hill. 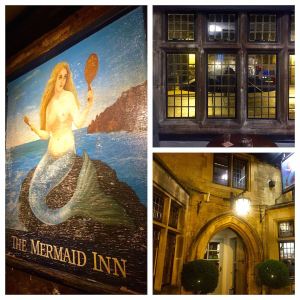 Dinner was at the Mermaid- one of a number of pubs in, or just off, the High Street. The food is simple, plentiful, and the batter on the fish, just perfectly crispy. 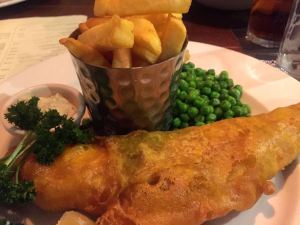 Speaking of travel fug, we need to speak about Heathrow.

We landed just after 12pm, and taxied what seemed like half the distance back to Abu Dhabi. Then we stood in line at passport control. For over an hour. It could have been worse- the queue snaked a good way back to the gate itself. Babies who had had quite enough some 10 hours ago were making their feelings known- very loudly.

One lady collapsed in the queue.  She was lying there 4-5 rows behind us in a crumpled heap of black fabric and people were stepping past to shuffle through the queue. It was a good few minutes- or maybe it just seemed that long- before someone called for assistance.

We’d expected tighter security, we’d expected the additional questioning and, to be honest, that’s all ok. We hadn’t expected it to be well over 2 hours between landing and getting into the rental car.

Anyways, all is sweet…and I’ll show you around Burford tomorrow…

6am Tuesday & the humidity is off the scale… summer is well & truly here.
And just like that it’s Monday again…& a very humid Monday it is… #mooloolababeach
Hello Friday! I can think of worse places to be at 6 am… #mooloolababeach
Just. Look. At. That. #mooloolababeach
It’s been a while between bakes (& oh how I’ve missed it) but here’s my first attempt at Eccles Cakes… I still have a bit of work to do, but not bad for a first attempt. #ecclescakes #brookfordkitchendiaries #bkd
Flame Trees and Jacarandas… love the colours at this time of the year…