Each month I’ll review a cookbook – new or old from my shelf.  The featured cookbook for April is Ella Risbridger’s Midnight Chicken (& Other Recipes Worth Living For)…

I’m going to preface this review by saying that this is the best cookbook I’ve read in I can’t remember how long. And yes, you did read that right – I read this cookbook from cover to cover before I cooked a single thing from it. There were, in fact, times that I truly forgot that I was reading a cookbook – but then to simply call it a cookbook is also to do it a disservice as it’s way more than that. It’s about hope, it’s about healing and it’s about comfort. It’s also a love story between Ella, the author, and the man she fell in love with at 17 – the Tall Man.

There are times when it’s laugh-out-loud-until-you-cry funny, and times when you just cry. I made the mistake of reading the acknowledgements before I read the rest of the book – don’t look at me like that, it’s something I often do – and it tinged everything with a bitter-sweet extra taste of sadness. More on that later.

This is a cookbook like no other I’ve read. It’s also a cookbook that could be made into a film. Truly. And you should have seen the look on my husband’s face when I told him that.

The book starts from a point where, at the age of 21 with seemingly every reason to live, Risbridger wanted to end her life. “I tried to step into the path of a No 25 bus, destination Oxford Circus.”

The Tall Man took her home from the hospital and taught her to cook. As she learnt she wrote about it and cooked for him. It became a way of seeing and savouring the world freshly, together.

“There are lots of ways to start a story, but this one begins with a chicken…in a cloth bag hanging on the back of a kitchen chair. It was dark outside, and I was lying on the hall floor, looking at the chicken through the door, and looking at the rust in the door hinges, and wondering if I was ever going to get up…

But this is a hopeful story. It’s the story of how I got up off the floor.

The first recipe in this book is the Midnight Chicken in the title; and the last, chicken stock, is made with the leftovers of the first.

In the middle is a whole collection of recipes and recipes that are more of an idea or a feeling than a recipe – but all with the theme of the redemptive power of cooking and eating. Oh, and no photos – not a one. The book is, however, beautifully illustrated.

I’ve highlighted and turned the corners on so many of these pages that I have no idea how I can properly tell you about it without this post going for the length of a small novel, but I’ll give it a try…

I love the titles of some of the recipes. Aside from the Imperfect Pikelets which I’ve already told you about – I don’t know what it is about the word pikelet that always has me mixing my letters up – we also have Jam for Out of Doors Jam Sandwiches, Glumday Porridge, Wicked Stepmother Black Bread, How to Grieve with Challah Bread, Danny the Champion of the Pie, Would I Lie to You Labneh, Imaginary Granny’s Latkes, Marital Harmony Sausage Pasta and Life-Affirming Mussels.

Peppered through the book are snippets from Risbridger’s childhood which sounded idyllic and very Enid Blyton-y. She’s even said in interviews how it took her some time to realise that there probably hadn’t been childhoods like that since the 1950s. There are snippets of her domestic life, and even a few life lessons – such as the one about bacon versus sausage sandwiches: red sauce on bacon, never brown, and brown sauce on sausages, never red.

Every recipe is a story, or a lesson, or part of hers and the Tall Man’s love story. Take this one about the making of Danny the Champion of the Pie which is, in fact, a recipe for a proper pork pie.

“Here are the morals of this story.

First: that it is in nobody’s best interests to begin to make a complicated pie at a quarter to eleven at night.

Second: that hot pork jelly will (if it can) go everywhere.

Third: that hot pork jelly, a gas hob, two a.m. and an impossible dream of a marvellous pie are a terrible recipe for a happy relationship.

Fourth: that no pie will ever live up to the description of the perfect pie you read when you were seven, and it was the start of the summer holidays, and you were upside-down three-quarters of the way up the pear tree in the back field.

Fifth: that the truth of morals one through four doesn’t mean it isn’t worth trying anyway.”

The fictional pie is one in a children’s book Danny the Champion of the World, and the making of the pie in question results in rows and mayhem.

“Pop your pie into the oven (marvelling a little). You now have 1 ½ hours to play with. You may not, however, sleep. I suggest having an enormous row with the person you love best about the practicalities of making pie at one in the morning or reading a good book. Again, your call.

Set a timer for 30 minutes; when it goes off, turn the oven down to 160C, and re-set the timer for 45 minutes. Continue with row/good book.”

So far, I’ve cooked the Imperfect Pikelets, Marmite Spaghetti – which I’ll tell you about separately another time and which is now something in my new novel – and a couple of the super quick pasta dishes. 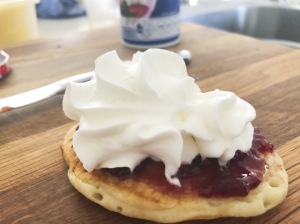 I’m going to give The Tall Man’s Cheese Scones a whirl over the weekend and also have plans for Stuck in a Bookshop Salmon & Sticky Rice. I also have plans for her Viennese (or coddled) Eggs that I have to make just because of the minute by minute instructions:

Second and third minutes: The eggs are cooking in the lid-on pan, with no heat under it at all.

Fourth minute: The eggs continue to cook in the lid-on pan, still with no heat under it.

…Ninth minute: The eggs are in the cup or glass. And breakfast is ready. Find sunbeam in which to sit.

In fact, I’ll be cooking something from this book each week during April.

By the way, this next part isn’t a spoiler alert because if you google Ella Risbridger you’ll find it front and centre of every article… Anyways, I have to take a deep breath before writing this, but John Underwood aka The Tall Man died at the age of 28 – just as Ella finished writing the last draft of the book.

“This book was written in hospital corridors and chapels and in the long, lonely nights watching to see if he was still breathing,” she writes. “And I wrote it at least in part to keep our world alive if he couldn’t be.”

After he’d helped her get better he became terminally ill. See what I mean about the film thing? A fellow writer, he chronicled his battles through a blog and, in the process, raised a heap of money for a British Institute that deals with blood cancer.

And another - because it’s Monday #shareyoursunshine
Monday…. Already?
Winter in Queensland…. #thebigblue #herveybay #herveybaymarina
Sunrise, a cup of tea, an (early read) of a good book & the sound of waves against the rock wall. Sunday morning in #herveybay
Yeah… not too shabby… another glorious morning at the bay…. #herveybay #urangan
No walk this morning. I had my first covid vax yesterday & while I’ve pulled up ok, the 4.30 alarm was just a step too far. Instead you have @adventurespaniel behind a curtain in the sun. Happy Friday.