This post has also been published on my Sunshine Coast blog – Navigator.

I’ve been bookmarking pictures of Buderim Falls (or “Serenity Falls”) since before we moved to the Coast. The pictures on instagram showed a lush rainforest with a relatively short (hello, I’ve seen the size of those falls in New Zealand…just saying) waterfall into a beautifully lit turquoise swimming hole. Of course I was keen to go!

There are two entry points to Buderim Forest Park – and two ways to get to the falls:

The lower entry is at Lindsay Road near Harry’s Restaurant. The track from here takes approximately an hour return – longer with stops. It’s boardwalk for approx 600m and then bush track. Apparently the track gets a tad “rugged” and the website says it’s not great for those with “walking difficulties or a low level of fitness.” I’ll try that way next time – I needed to get back today to get some words written. There’s apparently barbecues and picnic facilities here.

I went with the entry closest to our house – the one at the base of Quorn Place. There’s  a good amount of parking here and well maintained barbecues and picnic tables for when you’ve finished the circuit.

The circuit track itself is quite short – less than a kilometre return. It begins with a relatively steep downward bush trail. My knees aren’t great  – and I’m petrified of being the big fat lady falling down the hill, so I took it quite slowly and it was absolutely fine.

About 100m down there’s a fork in the park. I took the option of heading through the open forest so went to the right, crossing a short bridge and walking through the edge of the forest. With the sound of the trees, the birds and the tinkling of the water below, it’s just beautiful in here. It’s also hard to believe that we’re pretty much in the middle of Buderim.

From here there’s another short and steep-ish downhill scramble to the bridge above the falls. Apparently the bridge was built offsite and lowered into place by a hovering helicopter. #funfact

You can walk down into the swimming hole and around behind the waterfall,but when I was there, there was a proper photographer with a proper kit set up down there – and ruining my photo (see the main shot below). 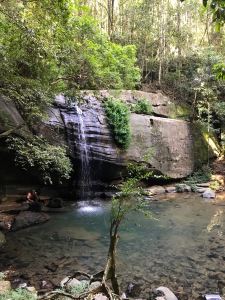 The falls themselves weren’t at full flow today – we haven’t had rain in a long time – but it’s still beautifully serene down there…get it? Serenity falls? Oh, never mind…

After a short piece of boardwalk, it’s all uphill from here to get back to the carpark. But it’s do-able, it’s only 300m (or so), and there’s a viewing platform part of the way up that you can catch your breath at.

The path from Quorn Close is not accessible for prams or wheelchairs.

Sorry, no, not this one. There are no dogs allowed in the forest park.

Yes, at the entrance.

How hard is it?

It is quite steep downhill to start – which means it’s quite steep to come back up. You step down from rock to rock – so it can be very slippery after rain. The path itself is in pretty good condition. The steep parts are over and done with quickly and the distance is short so anyone with moderate fitness can do this one. Just take care after storms when there can be debris over the path as well. Don’t try this in thongs/ jandals/ flip-flops.

Can you swim in the swimming hole?

People do – I’ve seen the evidence on instagram. Apparently the creek passes through suburbia and some stormwater drains to reach the falls, so…well, I’ll leave that to you.

Check out this page.