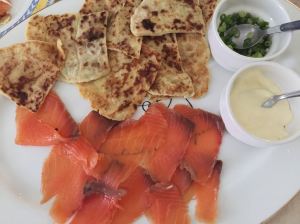 One of our must-haves at Christmas is potato scones for breakfast while we’re unwrapping presents – and making them is hubby’s Christmas Eve ritual.

I think I’ve mentioned before how hubby was born in Scotland, and these scones are part of his heritage – although to call them “scones” is a misnomer. They don’t look anything like what you’d have at tea with jam and cream. For a start, they’re flat. They’re sort of a little like a pikelet- or a blini- although what we know as pikelets are called drop scones or Scotch pancakes over there. Anyways, these might be a little like a pikelet, are called a scone, but are actually nothing much like either – rather than the batter being dropped into the pan, the dough is rolled flat and cut into the desired shapes and cooked on a griddle or hot pan.

We bought some ready-mades when and as we saw them while touring around England and Scotland, but they weren’t as light or as yummy as the ones hubby makes.

We have them with smoked salmon, sour cream and a little dill for breakfast each Christmas. We have the leftovers (if there are any) with unsalted, sinfully creamy, real butter. They’re also good as a side on a proper cooked brekky – they fold beautifully to mop up runny egg and bacon fat. Yes, that came out loud. Oh, and for those of you who’ve read Wish You Were Here, I lent Max the recipe – she prepares some of these in Chapter 2.

With apologies to gluten free readers, here’s how it’s done.

About 250g of well mashed potato (hubby put them through the potato ricer this time, but you don’t need to go to this level of detail)

about ½ cup of plain flour

…oh, and some salt and pepper…

While the spuds are slightly cooled (really hot potatoes will absorb too much flour and give you a doughy result), stir in the butter, and the seasoning. 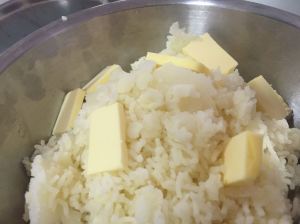 Knead in as much flour as the potato will take to become a pliable dough. I do this with my hands, but hubby doesn’t like getting his dirty…

Divide the dough into smaller balls and roll each out thinly. Cut into rounds or triangles and prick the surface with a fork. 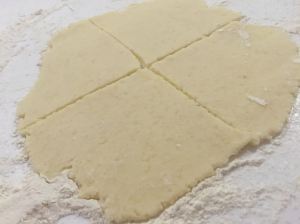 Heat a heavy based frying pan, brush the surface with a little oil, and cook the scones in batches for about 3 minutes on each side, or until golden brown.

Store in a clean tea towel and hope they last until Christmas morning….