I’m broken. In pieces on the floor broken. Like in the Natalie Imbruglia song broken. I can’t walk another step. Plus my big toes both hurt – I suspect I’ll be losing both of those toenails, and probably another 2 or 3 that have taken on a nasty bluey-purpley tinge.

We left the lodge at 7.30 this morning and I hobbled back in just before 6pm tonight. The 1st 6 hours were spent climbing. I finally got to Pass Hut at 1.30pm. I didn’t think I’d get there at all. I wouldn’t have if it hadn’t been for Ellis. (and yes, he’s heard the jokes about ‘who the f$%# is Ellis?’) There was a time where I was sure that they’d be needing to call Queenstown for a chopper for me. In fact, I don’t think I’ve ever been so sure of not being able to do something in my whole life- except for the fact that there was no flipping way I was spending good helicopter money on a bad view day. 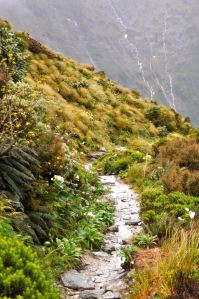 It pelted down with rain again last night, so I lay awake for hours worrying about the conditions we’d be facing today – and so I should have been. Things started ok, but rapidly went downhill in an uphill sort of way.

Going up there were lots of water hazards and some really exposed high parts – especially once we’d cleared the beech. The well-formed track of yesterday was gone and in its place were rocks and rubble – the sort that you need to haul yourself up and over. Thank goodness for poles. And the switchbacks – they go on and on forever. There used to be 11 – now there are more: 2a, 2b, 2c, 2d, 2e and 2f. Don’t ask. Some were much longer than others, some were much steeper than others, some required more levering up rocks than others, some had you perched on the end of the world – or is it the edge of the world.

Up top at the Mackinnon Memorial, the clouds cleared a little, briefly. There was still another half hour climb to the highest point and Pass Hut (our stop for lunch), but for now we could have a milo and a short rest. 12 second drop was obscured. That’s it in the pic below. Ellis told me how he’d stuffed the joke the previous night. He was supposed to say something like ‘the 1st 11 seconds are breathtaking and the 12th second takes your breath away…’ or something like that. 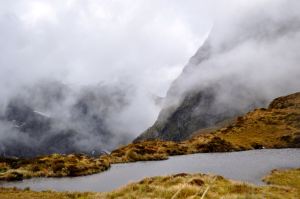 Getting to the Pass Hut was a relief. On the up-side (get it?) because I was up there on my own, I was able to sit on the (long- drop) loo with a view and take a pic of the view without having to close the door. 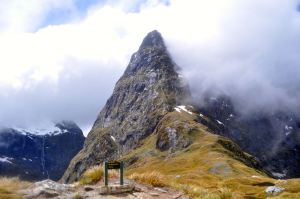 While getting to the top of the Pass did me in physically, getting off it and going downhill did me in mentally and emotionally. We had to use the emergency track – which was even steeper than the usual track – so every step was considered carefully. I watch some of the others bounding down with every confidence that their foot will hold them in place and their knees will hold them up, and they won’t go crashing down the mountain, but I couldn’t do it any faster than one carefully considered step at a time. Much of the next 4 ½ hours was spent clambering down and over rocks and literally down through waterfalls with the water flowing over them. At one point in the distance we heard the boom of an avalanche across the valley.

Anyways, I wouldn’t have made it down without Veronica – she was another of the guides…and possibly one of the most gorgeously perky people I’ve ever met. May she never lose that perkiness.

When I finally got in, everyone came out and cheered me. That’s when I cried, and once I started I couldn’t seem to stop. I’m tearing up again now as I scribble in my journal. Today has been the single most challenging day – both physically and mentally – in my entire life and the tears are still flowing – even though it’s not far past 8pm and I’m in bed. My toes are hurting and I’m too tired and too sore to sleep.

I can’t get my head around any highlights or any silver linings. People tell me I should be proud that I made it, but I’m not. I’m still too disappointed with myself and my own limitations and fears. Perhaps in hindsight I’ll be able to see the effort for what it was. For now it’s enough to say that I seriously underestimated the climb – and that disappoints me. I think I thought it would be like day 2 on Routeburn. I’m sure I could have prepared more for that – made a real effort to lose some weight and walk more off-road hills – but at present can’t think of any way in which I could have prepared more effectively for the mental effort of the downhill and those rocks and the slippery conditions and the constant fear of falling and injury.

Everything was possibly exacerbated today because I made myself sick with anxiety this morning, threw up my breakfast, and had difficulty swallowing anything all day. Again thanks to Ellis and Veronica for pushing barley sugars down my throat.

Speaking of food, tonight’s meal was the best yet, but I barely managed a few bites. To start we had mushroom soup – one of the best I’ve tasted – followed by crispy crumbed fish with a fabulous tartare sauce. Apparently dessert was sticky date pudding, but I had to excuse myself from the table before that came out. Nor did I last for the evening briefing. I’m not sure I want to know what’s ahead for tomorrow – although hope that rocks are not involved.

Tomorrow is the last day on track – and we’ll be backing up to walk a half a marathon. I’m hoping that once I clear the last of the downhill rocks and hit the base of the mountain, things will be ok again. I doubt that my clothes will dry in time, and I know that my boots won’t. One more day. 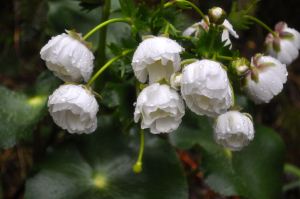 Oh, I thought of a highlight- 2 in fact: the lovely white Mt Cook lillies that were everywhere on the pass and the weka and her 2 chicks that we saw hanging around Pompolona this morning. She made this deep thudding noise in the back of her throat – almost like a bass note – and the chicks come back to her. Too cute.