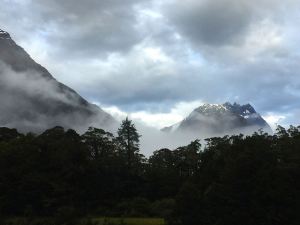 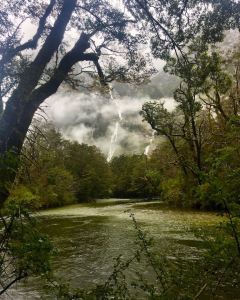 The rain poured down hard last night – so loudly that it made it tough to sleep. This morning there were glimpses of blue in the sky and the most beautiful birdsong you ever did hear. And waterfalls. Everywhere there are waterfalls.

The 10 miles is done and I’m sore – but mostly, I suspect, from the bruises and bumps I sustained on the fall yesterday.

On the upside, I managed the distance without too much trouble and in reasonable time, getting back to lodge by around 2.30pm and not at the end of the pack. More importantly, I didn’t fall again.

When I took all my layers off this afternoon everything was so wet – partly from sweat, but mostly from the rain that started almost as soon as we began walking, and didn’t let up. The extra merino layers I bought in Queenstown earned their keep today.

On top I wore my merino cami, merino t-shirt, merino long-sleeved t, and my rain jacket. On the bottom, I had my long thermal pants and ¾ gym tights. It was a good look.

Ultimate Hikes have a guide up the front, one down the back, and a couple of social butterflies in the middle. I was none of those things so spent most of the day walking alone and absolutely loved it. In terms of difficulty, today wasn’t too bad. Until the last couple of miles it was mostly flat. My legs were sore and that, of course, is when we started to climb. By most standards, Pompolona Hill isn’t challenging, but when you’ve already walked 8 or 9 miles in the rain, it becomes so.

At the top of Pompolona Hill, Ellis (one of the fabulous guides) was there to help me (and everyone behind me) across Marlene’s Creek.An avalanche site, I’d imagine it would be normally quite tough, but in the rain with the water levels rising, it was quite frightening to cross. It really was just a case of wading through it and dealing with the wet boots. Thank goodness for drying rooms.

As for what today was like? It started damply, rained heavily, drizzled a bit, was briefly sun-lit, rained some more, misted over a bit, and rained heavily again. Everything was wet, and it was also lushly, greenly, incredibly beautiful.

Waterfalls poured off every mountain – almost as if the mountains were crying gushing tears. The Clinton River, which was on our right all day, was a swirling, twirling, torrent of rapids, and the streams beside the path – and across the path – tinkled and gurgled. It was almost musical the way in which the water dripped onto the leaves, the track, the ferns, my hood. I didn’t know before today that water could make so many different sounds, and that so many different shades and textures of green existed.

As uncomfortable and cold as the rain was, without it the walk could have been almost boring. 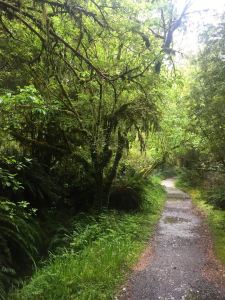 The track today was (except for Marlene’s Creek bed) mostly well-formed, and in better condition than I remember Routeburn being, and not nearly as technical as I was expecting it to be.

We spent the afternoon at the lodge watching the antics of the keas. Their beaks are perfectly formed to rip out nails, and strip the rubber sheeting from the glass on the roof, so the lodges attempt to keep them amused with old boots. They’re hilarious to watch, but very destructive. 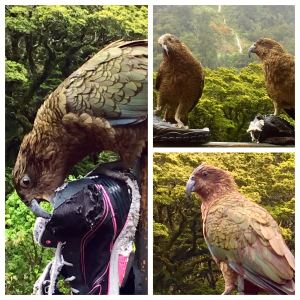 Dinner tonight was these yummy salmon rillettes to start, followed by beef rendang and coconut rice. Dessert was crème brulee, but again I didn’t touch it. Tomorrow is the tough day, and the generators will be on by 6.15am. We need to be on track by 7.30am. I’m dreading it.