I know what you’re thinking. You’re thinking something like: Jo is in Queenstown so there’ll be some great location shots and some fabulous photos of remarkable places to eat. You’ll also be thinking that I’ll be using the word remarkable a lot. And, you’d be pretty right…but today I want to talk about a classic of the Kiwi South: the cheese roll.

But first, my introduction to the cheese roll came when I was wandering around St Peter’s garage sale and fete yesterday morning. An enthusiastic oompah band was drawing the punters inside with the promise of devonshire teas and a chat, while the barbecue outside was drawing them into the outside stalls with the promise of sausage sandwiches and cheese rolls. On a barbecue? Yep. One of the old guys manning the hotplate has a son with a shop in Castle Mall – or it could be Castle Towers… he couldn’t be sure – so we got to talking. Before I knew it, I’d parted with $1.50 and had a rolled up piece of bread in my hand. A cheese roll. It was delicious. 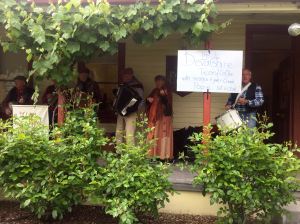 Later, at a far more salubrious restaurant – Josh Emmet’s Rata – I ordered the Southland cheese roll for my starter. This one was all ooozey cheese inside, and was served with a dollop of local honey and a pear and hazelnut salad to cut through all the cheesey richness. Like a bready, cheesey, croquette. It’s one of the yummiest starters I’ve tasted.

What’s in one of these? I’m glad you asked.

The traditional Kiwi version (not the poshed up Rata version) is a gooey concoction of grated cheese, packet french onion soup, evaporated milk and finely chopped onion. Some might have cream and mustard added as well. It’s all heated in a saucepan until the cheese is melted and the consistency of thick cream, then it’s spread onto white bread (that the crusts have been cut off) and rolled up. Some people butter the other side of the bread too- so it toasts crunchy and golden. The little rolls are then cooked in the oven.

That’s it. If you’re interested, here’s a recipe. I’ll be trying it when I get home…I have the feeling it would also be good on the camp oven…now, there’s an idea!