I think it’s time that we talked more about the mighty jaffle.

For hundreds of years people have been putting fillings between two pieces of bread and putting it all in a cast iron jaffle maker and sticking it into an open fire. Ok, perhaps I made most of that up, but it could very well have been true. I’d very much like it to be true.

When we’re in Eucumbene we cook over fire- I’ve told you that before. Part of that involves a jaffle-off…it’s a competition of sorts.

This year, inspired in part by a challenge on Masterchef, I put some serious research into it. I started with a poll of sorts- on Facebook. Some seriously good suggestions came up. We had (amongst others):

I spread my survey wider- and opened most meetings at work with the question: ‘what’s your favourite jaffle filling?’

The key findings from all of this research was clear: everyone has a favourite jaffle filling…and pretty well anything can go into the middle of one- as long as cheese is involved.

To keep it simple for the campfire, we came up with some rules:

So, what did we come up with? 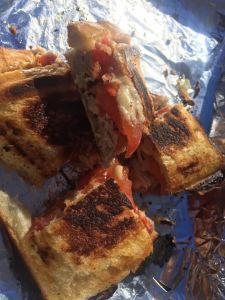 and, the kids’ favourite for the day, the spag bol (Tuesday nights dinner- leftovers frozen) jaffle.

All prepared outside on the Eucumbene masterchef kitchen, and all cooked in jaffle irons over fire.

What’s your favourite jaffle filling? Have you tried the plastic cheese and peanut butter combo? Yeah, no, me neither…

A moody #mooloolababeach this morning…
Workwear for the first day of summer in the home office…
Grant had a day off today so we took advantage of that with lunch at @riceboi_mba It’s been a while since we last came here - mainly because I refuse to queue & there’s always a queue - even on a drizzly Wednesday. It did however move quickly & the eggplant chips & sriracha pork buns were worth it.
6am Tuesday & the humidity is off the scale… summer is well & truly here.
And just like that it’s Monday again…& a very humid Monday it is… #mooloolababeach
Hello Friday! I can think of worse places to be at 6 am… #mooloolababeach