As I’ve been banging on for a few weeks now, I’m deep in deadline territory. That’s ok- I tend to respond well to dates and milestones. It’s settled into a bit of a manic rhythm: corporate gig during the week, blogging during the week, horoscopes and book on the weekend.

I’m not procrastibaking as much as I was, but I am still in the weekly baking habit- mainly because it’s my way of channelling my character, Max.

I bake the things that I think she’d be baking- although my styling is seriously crap, while hers is good. Plus, I’m the messiest cook in pretty well the entire world (a characteristic that I’ve generously lent to Max). This means that either:

Take yesterdays gingernut dunkers for example. In the book they are evenly round and a little cracked on top.

Mine look like someone has taken a bite out of them- they haven’t of course. This was just where they stuck together on the tray. To be fair, all the good ones were picked out to be taken to Mr T’s work.

And yes, I know what I did wrong that caused them to spread a little more than they should have. The solution involved a fridge and a fork. Whatevs.

As for a recipe? There are plenty on the internet. I just happened to use one from The Cook and Baker.

It’s like last weeks’ Belgian or Empire Slice which, in the book, looks like the main photo above.

This is a gorgeously old- fashioned spicy, gingery, jammy slice. But it’s brown.

It has a pressed cookie dough base, a raspberry jam centre, and the top is crumbly, wormy grated cookie dough. The thing is, it’s brown, and tastes and looks better than it photographs- especially when dusted with icing sugar.

I think Max would take both of these brown things outside into the herb garden on a lovely Spring day. She’d probably pile them high on a blue pottery plate, or perhaps one of those vintage china ones with flowers all over it. She’d place the plate at the edge of a garden table, perhaps one that had been battered or had the remnants of multiple paint jobs and potting days.

She’d widen the aperture on the lens, narrowing the depth of field so that the light and the flowers would blur into background prettiness.

I couldn’t be faffed.

Anyways, to the recipe. Also from The Cook and Baker, the grating of the cookie dough is a bit of a palaver- especially on a humid Sydney summer day when the dough keeps softening and you’re going from fridge to grater and back again. It is, however, worth the effort.

How do you style brown food, or can’t you be bothered? I’d like to know either way… 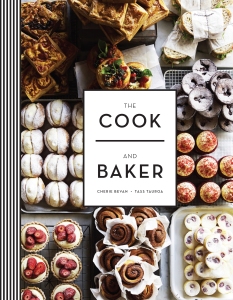