Have I ever told you about the time that we tried to go whale watching in Kaikoura in New Zealand? No? Well, that time we attempted to go out three consecutive days, only to have the trip cancelled at the last minute because of bad weather. We never did get to see those whales.

York Minster is a little like that. The guidebooks say that if you see one gothic cathedral in England, this is a good one. Some say it’s the best. It was on my list when we were last here twenty years ago, and it was on my list as a must-do for this trip. It wasn’t to be. I can’t remember why it was closed last time, but this time it was because of University graduations. Couldn’t they do it on another day?

I had to be satisfied with pics from the outside. Again. That’s it creeping through the alley in the pic above….and being a little more obvious in the pic below.

The sheer size is incredible- even from the outside. Here is is from the side,

and from the front…

As an aside- just how lucky did I get with lighting? The sun (not out for long…) gave the Minster a warm golden glow. Hashtag no filter. 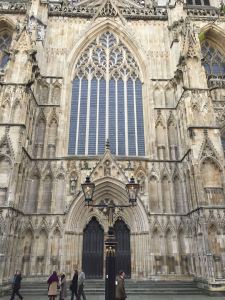 Despite the grandeur of the Minster, probably the most photographed area in the centre of York is the small street full of over hanging shops known as The Shambles.

Originally butcher shops, it now houses a combo of gift and foodie shops. These photos were taken relatively early in the day. By mid afternoon, it was mobbed. 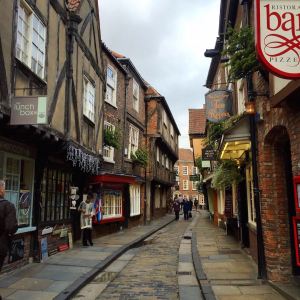 It’s not just about the Shambles though- cute shops

and pubs can be found down every “gate” or street.

With no cars (vehicles are permitted in only for delivery purposes), the very centre of York is a pedestrian paradise.

There was a market on in the square behind the Shambles- selling some food, but mostly clothes, gifts etc. Christmas themed sweaters seemed to be in demand (aka Colin Firth in Bridget Jones Diary), but one stall was doing a nice line in bingo dabbers (for a pound) and Caribbean bongs. Hmmmm.

Just around the corner in Parliament Street, a Christmas market had set up. 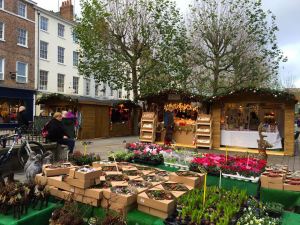 Much more our style, this was all about the maker, the artist. There was a foodie market attached. I bought some mulled wine to sip at as we walked around, and somehow managed to resist the pork pies and pork scratchings. 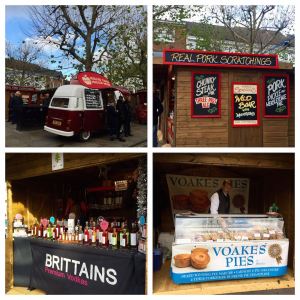 We spent a tenner and well over an hour in Castle Museum. Housed in the old Women’s Prison and Debtor’s Prison, it brings Victorian streets, 1914 and wartime, and the swinging sixties to life. In the debtor’s prison, a series of projections tell the story of some of the previous inmates- the most famous being the Highwayman Dick Turpin. Well worth a visit.

This whole area was once part of York Castle. All that’s left now of what was a Norman stronghold is the keep known as Clifford’s Tower. From the top of these steps you can see across York.

It goes without saying that there are heaps of pubs here and, unusually for a tourist area, most are good- yet busy. I went a little mad photographing the name boards.

I’d planned to lunch in one of the riverside pubs near the theatre district, yet there’s been a bit of rain lately and the river view was just a tad too close… 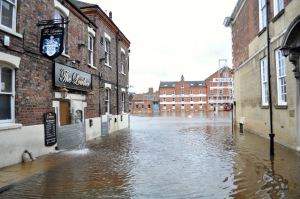 Instead we stopped for a couple of pints and a good pub lunch at The Old White Swan- although apparently the locals refer to it as the Mucky Duck. Yes, that’s a lot of food!

Tomorrow we’re off to the seaside. The weather is forecast to be cold and blustery, so I’m hoping for crashing waves and bracing winds…and maybe fish and chips…