I’ve decided that we need to see more of Australia. Maybe we’ve reached that age – the whole adventure before dementia thing.

The problem with travelling in Australia is cost. It’s bloody expensive to fly from one side of the country to another. It’s cheaper to go to Bali than Broome – and a lot cheaper to stay and eat once you’re there. The other alternative – doing the long lap, or extensive road trips – requires time…and lots of it…which is why it’s often not feasible until retirement.

Just lately I’ve been having a few strange fantasies – no, not that sort of fantasy, but the sort that involves 4WDs, camping and shopping trips to places like BCF (Boating, Camping and Fishing).

The thing is, I don’t think I’m the camping type. I like the idea of camp cooking – and still intend writing the definitive outdoor cookbook – and I like the idea of exploring new areas. But I’m a girl who likes her comforts – and her sleep – so camping or caravanning is probably not going to be my thing.

Knowing all of that, and despite all of that, I’ve come up with my Aussie Travel Bucket List. As with all bucket lists, it can be added to (or subtracted from) at any time. Here goes…. 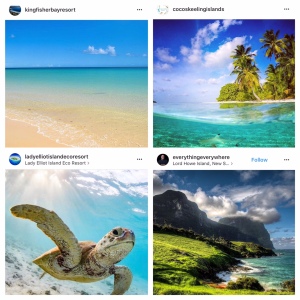 Lady Elliot Island. This island, off the coast of Bundaberg is part of the southern end of the Great Barrier Reef. The accommodation is a tad more basic than the vast resorts further north, but the attraction for me is the sea turtles and the rays.

Cocos (Keeling) Islands. This place has been described as like the Maldives but an Australian territory. Stuck out in the middle of the Indian Ocean about halfway between Perth and Sri Lanka, there’s little in the way of tourist infrastructure, but it looks like the perfect place to escape and chill. If I was going to write a character that needed a hide-out, I think I might send them here.

Kangaroo Island. For the nature, the landscape and the food…mostly for the food.

Fraser Island. I’ve wanted to come back here ever since we did a day trip while on honeymoon back in 1994. We’ve booked to spend New Years Eve here.

Lord Howe Island. This place was described by David Attenborough as being so extraordinary that it’s almost unbelievable. That’s why.

Tasmania. I’m including Tassie on the list because we haven’t been there since early 1997 and after seeing a friend’s pics I want to go back – for the wilderness and the history. Oh, and Bruny Island while we’re there – for the food.

Due to work, I’ve visited Perth a few times – and had a great long weekend knocking about the Margaret River and Busselton with a friend. There’s so much more to see though. Albany is apparently worth a visit and the turquoise waters of Esperence is definitely on the list, following which I’d go across to Middle Lake – just 70 nautical miles off the coast – to see the fabulously pink Lake Hillier.

Nigaloo Reef and swimming with the whale sharks there have long been on my bucket list, as has camel riding at sunset on Cable Beach at Broome. From here, The Kimberley also calls. 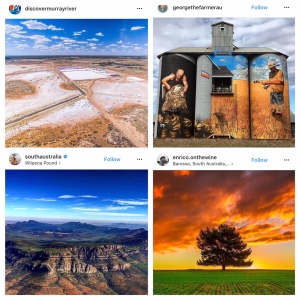 After watching the Masterchef Heston roadtrip last season, I’d like to do the Silo Art Trail in the Wimmera Mallee region and have a look around Swan Hill, Mildura, and into the Murray basin.

Oh, and I’d like to do the Great Ocean Road.

I’ve been to Adelaide a few times – mostly for work – but would like to explore the wine regions. Adelaide Hills, the Barossa, Clare Valley – they do wine and food destination tourism extremely well, and hubby is very partial to a South Australian red.

Wilpena Pound and the Flinders Ranges. The landscape looks fabulous. That’s why.

Uluru, of course, because I think you have to. Also Kakadu for the sheer size, and the culture.

We’re talking about doing a roadtrip to Cairns. It’s 1600kms from the Sunshine Coast, so that’s a lot of driving. Of course from here is access to The Great Barrier Reef. I don’t think I need to say much more about this other than to say I also want to go to Whitehaven Beach with the white silica sand.

If the opportunity presented, I’d be interested in seeing Longreach, but at 1200kms away – much of it through miles and miles of not a lot – it’s not making the bucket list.

Closer to home there’s also Bundaberg, 1770, and Hervey Bay I’m keen to have a look around.

Why isn’t there anywhere from NSW? Mainly because I’ve lived in NSW for all but the last few months of my 50 years. I’ve lived in Sydney, Canberra, the Hunter Valley, the Blue Mountains, and a little town near the Victorian border called Bombala. My father’s family is from Tumbarumba also down south. I’ve covered the entire coast, travelled inland as far as Lightning Ridge, and explored the Snowy Mountains.

Have you been fortunate enough to see much of this fabulously huge country? What’s on your Aussie travel bucket list? 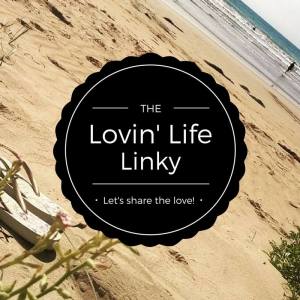 Ok, it’s Thursday, so that means sharing our happy. Feel free to link up a post that reflects what you’re lovin’ about life. All bloggers are welcome! Fashion, food, beauty, business, personal, parenting, whatever.

If you’re not a blogger then use the #lovinlife hashtag to tag instagram photos or tweets about the things that are making you smile. You can also click on some of the Lovin’ Life links below and see what else is in the blogosphere. So much to love …

The linky goes live at 7.30am every Thursday and finishes at 7.30am of a Monday (Australian Eastern Time). Click on the link below to join in…

An InLinkz Link-
up