I remember the first Christmas tree Mr T and I had.

It was for the Christmas of 1989, we’d been together for about 6 months and he’d moved in stopped going home. We decorated an indoor “happy” plant with tinsel and put pressies around the pot. It was special.

Then when we moved into our own house just before Christmas the following year, we invested $20 in a 2nd hand tree and started collecting decorations. When Miss T came along we started the tradition of buying a new ornament each year. We started the year I was pregnant with her – I still remember buying this gorgeous glass ball from DJs in the city. 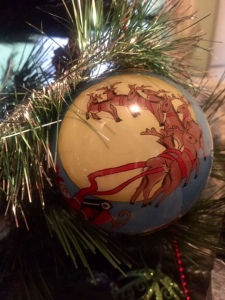 The following year she chose her first ornament – pointing to this gold bear from her pram. 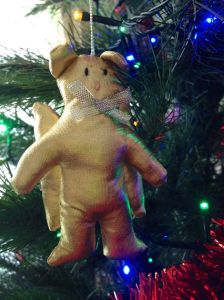 Over the years she’s chosen the cupcake Santa, the Surfing Santa, the parachuting Santa and a variety of bells and baubles. Her favourite is still the Ted Baker glam from Melbourne in 2014.

Then there are the ornaments that remind us of people and places. There are the pandas I brought home from Hong Kong when I was there doing a relocation for work (2008)

the pottery bird from the handmade markets in Perth when I was there doing a relocation for work (2009), and the pohutukawa my friend brought over from NZ. Whenever I hang that I think of her and my “adopted” country.

Last year we brought 2 back from London: a suitcase with a map that was a reminder of the major project Miss T had done for the HSC that year

and this cocker spaniel that we splashed out on in Liberty. It’s a posh cocker spaniel and looks nothing like Kali, Adventure Spaniel, but a spaniel it is. 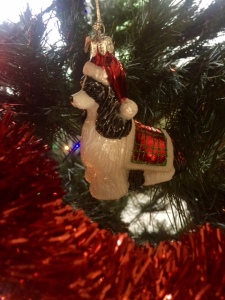 The year Kali, Adventure Spaniel, was still quite puppyish, we hug bells on the bottom row so we’d know when she’d gone under the tree to steal presents. She never chewed anything, just carried them away – one by one- to stockpile them in her favourite hiding spot.

We upgraded the original $20 fake tree some years ago and decorating it has become one of the traditions we’ve created for our little family. We pop the cork on a bottle of bubbly, prepare platters of nibbly bits (that we serve on ceramic trays that Miss T has painted over the years), and load the Christmas music mix onto the ipod- making sure that there are at least four copies of each of my favourite songs, and absolutely none of the ones I dislike the most.

Then we put the tree up. Hubby and Miss T usually have at least one argument about how she doesn’t read his mind and know exactly what ornament he wants her to pass next. Miss T usually has at least one comment about how I’ll never manage to hit the high notes on Mariah’s version of All I Want For Christmas and how I don’t need to do the boob wobble every time I hear the jingly bit at the start, and hubby usually makes at least one comment about why it’s shuffled again onto All I Want For Christmas, and at least one question about if I’m sure that it’s only on the mix once, and at least one query about why The Little Drummer Boy never seems to shuffle on. Then we’ll argue about which power cord is the one that shorts the rest of the house and how he thought we were going to label it as such last year.

Last year we arrived back in Australia after 7 weeks overseas just 2 days before Christmas. We’d left  for England in the middle of November when it was way too early to think about putting the tree up, and we arrived home way too late for it. We popped the Christmas playlist on, Miss T donned her Christmas sweater, we poured the Baileys over ice, and Miss T and I settled down to wrap the pressies we’d finished buying in November, but something was missing. The tree. Without it the presents looked so sad. So, at 6pm on Christmas Eve, the tree went up.

Nothing matches on our tree. It’s a mix of themes and colours and glitz and home-made…and there is a memory in every single last bauble. It’s chaotic, it takes up way too much room in the lounge room and it suits us perfectly. It’s also a real estate agent’s nightmare come true – for all of those reasons. I think it’s why this year when our real estate agent suggested we don’t put the tree up until after the photos were taken (if at all) I decided that emotionally I couldn’t do it – list the house before Christmas – even though in many ways it made logical sense to do so. It felt like I needed the inherent mess of Christmas the way we do Christmas in this house where Miss T had grown up one last time – without having to keep presents tidied away, without having to plan when I could mess the kitchen for baking, without having to worry about whether the tree made the lounge room look too small (which it does). The house is just a house, but it’s what we do, the tree that doesn’t match, the mess we make, the high notes on Mariah that we don’t quite hit that makes it all our Christmas.

What about you? Are you more mix or more match when it comes to Christmas trees?

Linking up (late) with the Loving’ Life crew via Debbish.