Ok, so we’ve been residents on the Sunshine Coast for just over a month now (less a couple of weeks in Vietnam). We’ve settled in well and are loving it beyond words. I have a list a mile long of places to explore, but here’s what I’ve learned already:

1. Active wear is appropriate for most social occasions.

2. So are thongs (flip flops or jandals…)

3. Everyone here can tell you exactly how long it takes them to get to Sunshine Plaza and Mooloolaba Beach.

4. The parking is actually free. Yes, really. That means you don’t pay for it. In most places.

5. Nearly everyone came here from somewhere else. Apparently we’re all imports – with most of us coming from Sydney, Melbourne or Auckland.

7. There really is a suburb called Bald Knob, and a beach called Dicky’s. (insert juvenile titters… I said titters)

8. Surely the coast has more yoga classes, new age options, and organic food places than anywhere else – on a per capita basis? (Is there a statistic on this?) And acai bowls. They’re everywhere.

9. There are more markets held each weekend than anywhere else in Australia – on a per capita basis. (I just made that statistic up, but it seems true).

10. The Sunshine Coast has the lowest rate of smoking than anywhere else in Queensland. (I didn’t make that one up, but read it somewhere – so it must be right.)

11. Indicators on cars seem to be optional extras. 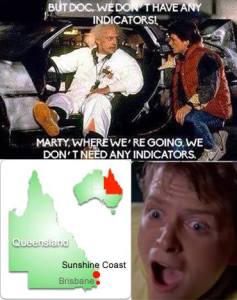 12. You don’t need to leave for the airport three hours before your flight.

13. The sign going into Noosa that points towards Noosa, or “all other destinations” annoys every non-Noosa local. The implication, of course, being that Noosa is the only place that matters.

14. There’s a lot more to the Sunshine Coast than Noosa. I saw this really funny meme that said it all but, in the interest of not upsetting Noosa locals – not that I’ve met any yet, but I’m sure that I’ll like them when I do – I won’t re-post here.

15. There’s a lot more to the Hinterland than Maleny – but Maleny is pretty fabulous.

16. We get annoyed when people mix up Gold Coast and Sunshine Coast. It’s like the Australia and Austria thing.

17. There are at least twenty coffee shops in and around Mooloolaba that apparently serve the best coffee on the coast.

18. It’s tough to get a decent dumpling – anyone who knows where the best dumplings are on the coast, please tell me…

19. Beer yoga is a thing – and it’s happening at the pub in Eumundi.

21. The Queen’s Birthday holiday is held in October – which is Labour Day for most of the rest of the country – and Labour Day is held on the first Monday in May – closer to the Queen’s actual birthday. Go figure.

22. There’s absolutely nothing better on earth than watching the sunrise from a Sunshine Coast beach. Nothing. Except maybe a sunset…

For all things Sunshine Coast related, duck on over to my other site Navigator