Inspired by Angela Savage’s bingo challenge post from this morning, I figured it was a good opportunity to look at my own reading history for the year. Angela based her post on a set of “bingo” categories, but given that I’m shocking with categories, here’s my 2016 between the pages.

How many books did I read?

According to Goodreads, I read 45 novels: 13,742 pages – although there were others that didn’t make it to Goodreads.

Yes, that’s a lot of reading, but I’m on a bus for an average of 3 hours a day – longer if there’s a traffic problem on the M2- so I have plenty of time to do so!

Ok, I’m not great with commitment, so the longest book I read was Penny Parke’s Out of Practice at 496 pages. Apparently the average length of a book I read is 312 pages. As an aside, whilst I enjoyed Out Of Practice it felt too long.

Nick Earl’s fabulous Gotham, at 57 pages. His Wisdom Tree series of novellas is a must read.

I worked my way through a few (new to me) series:

The Cotswold Murder series by Rebecca Tope. Although the character of Thea Osborne – the house-sitter at the centre of each of the mysteries – was not one I found easy to like, the stories and the locations (and Thea’s cocker spaniel, Hepsie) I had no such problems with.

I also worked my way through Victoria Purman’s boys of summer series, and DB Tait’s Deception trilogy (including the Christmas novella). I’m really enjoying the way DB Tait brings the Blue Mountains to life and look forward to the next outing of her characters – and not just because she’s a Facebook friend. I’m especially hoping we see more of Margaret – the ex-spy.

On the subject of romantic suspense, Bronwyn Parry’s Sunset Shadows was one of my top reads of the year.

Inspired by Agatha Raisin’s The Quiche of Death, I also made a fair dent in MC Beaton’s Agatha Raisin series. Given the number of these that Beaton has written, however, I’m thinking I might just stick to the TV series.

On the lighter side, I read all the Carole Mortimer Alpha, Knight Security, and Regency Unlaced series too. Yep, guilty pleasures – sort of like kraft cheese spread on white bread with butter and taco sauce. You won’t find them on my Goodreads list, but at the length of a long M2 commute or an afternoon on a pool lounge, I consumed them like one does a bottle of bubbles.

Thanks for the recommendation…

I rely on my book blogger friend Debbish for additions to my to-be-read pile, and she certainly didn’t let me down in 2016. One of my 5 star reads this year was The Magpie Murders by Anthony Horowitz. Given that he was the original writer of one of my favourite TV shows – Midsomer Murders – I should have known I’d love it.

Another recommendation I’m grateful for was from Angela Savage. One of her blogs introduced me to Sue Williams and Murder With The Lot and Dead Men Don’t Order Flake. Cass Tuplin is a reluctant investigator with a takeaway store in Rusty Bore – and it’s crime the way the way I like it, with more than a touch of earthy humour. Murray Whelan with salt and vinegar perhaps…

I’m currently reading Good Murder, by Robert Gott. It’s set in wartime Maryborough, and I suspect I’ll finish it by the pool tomorrow – make that 46 books for the year. As an aside, I’ll be working my way through this series too.

Yes, he’s back – and Ian Rankin has again resisted the temptation to rest on his laurels. I look forward to a Rebus most years, and Rankin keeps delivering. Last year’s was good, this year’s was better.

Books adapted to a movie…

I tend not to read blockbusters – in much the same way that I tend not to watch anything nominated for an Oscar. I’m a bit of a reverse snob in this way. This means that often I don’t watch movie adaptations.

I absolutely adored Bill Bryson’s A Walk In The Woods – almost a journal of how he attempted the Appalachian Trail. Yes, it puts my Milford Track dramatics into the shade, but the writing was so fabulous I watched the movie….which I enjoyed, but, let’s face it, there was little resemblance to the book – although I’m sure Bill must have gotten a thrill out of being portrayed by Robert Redford. 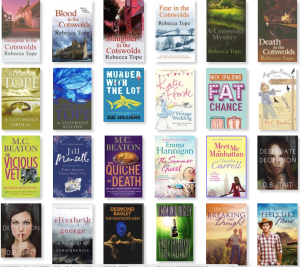 Which led me to…

Devouring pretty well anything by Bill Bryson. His The Road To Little Dribbling and had me giggling, and DownUnder…well, let’s just say it’s probably best not to read that on public transport. Travel writing – but not as you know it. You won’t look at a cow in the same way again. Or a rabbit.

Given that I write romance, well, contemporary romance, that’s what I mostly read. Having said that, I never read it while I’m writing it and, as Wish You Were Here took me so long to knock out this year, I hopped around a few more genres.

I’ve already told you about the travel writing and romantic suspense, but I also took a waltz into regency romance. I have to say, my experience with Carole Mortimer’s Regency Unlaced series eventually left me a tad jaded – something about the constantly tenting pantaloons will do that (am I allowed to say that in a blog?) but (Facebook pal) Anna Campbell’s Christmas novella A Match Made In Mistletoe was thoroughly enjoyable and I devoured it on a single commute. I’ll be reading a few more by her in 2017. Her characters were sparky, believable, and I wanted them to have a happy ending. In contrast, I found myself wanting to wipe the haughty smirk off most of Mortimer’s heroes. Someone should seriously have taught those men to use their words.

The Magpie Murders was also my first step into classic cozy crime – a la Agatha Christie. It led me to a confession: I’d never read any Agatha Christie. How can that be? I’ll be rectifying that too in 2017.

John Birmingham’s How To Be A Writer. Simply wonderful – and essential reading for anyone who wants to make money from this gig.

Sadly yes. Something called Extreme Leadership by two navy seals whose names I’ve conveniently forgotten. I had to read it for work, and, which there were absolutely some good common sense lessons in there, I couldn’t get past the war stories…literally. I got excited for a few minutes when one chapter started something like this: ‘Goddamn it,’ I yelled, slamming the door behind me. Sadly, that was the highlight. You won’t find that on my Goodreads list either.

I have a heavy writing schedule planned, so will limit my chick lit again this year. I have a cozy crime series fermenting at the back of my brain, so will read more widely in this area – just nothing where the kid is taken or the dog dies.

What about you? Any favourites? Recommendations?