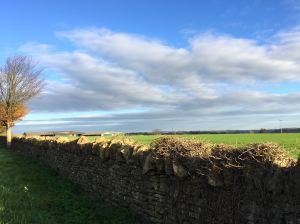 It’s been a while since I updated you with the progress of the novel formerly known as Finding John Smith…so here goes.

The title has been revised, revised again, and finally decided. I’m pleased to announce that the novel formerly known as Finding John Smith will be published as Wish You Were Here. That’s it- no more changes. I love the title and it really truly tells the story. Hashtag no spoilers.

Wish You Were Here is a novel about movement. There’s a lot of physical movement in that we start in The Cotswolds in a fictional village called Brookford that has fields and stone walls like the one in the picture above, and we finish in…well, somewhere else a long way away. Hashtag no spoilers.

More importantly, though, the story is about movement: moving on, moving out, moving past, moving through, moving forward, moving back. Movement.

In a way it’s ended up reflecting the sorts of themes that I’ve been dealing with on a personal level this year- I make absolutely no apologies for that.

As for my characters? I hope you’ll like them- I do. You had a brief introduction to Max and Richie in Big Girls Don’t Cry– they were on a horticultural fellowship with Brad in Denmark. Is that a spoiler?

It took Max a little while to find her voice, but now that she has, I’m having difficulty keeping her quiet. As for Richie? Well, I’ll have to leave that one up to you, but personally? Yep, he does it for me! I’ll introduce you to both of them- and Brookford- over the next couple of months.

The final structural edit is back, and as always the lovely Nicola at Ebookedit has done a fabulous job of interpreting the story I want to tell. She’s made some great suggestions regarding ways in which it can be tightened and improved. Thankfully there’s not a lot of work left to do, so we’ll go into copy edit at the end of August. Before that I’ll send it out to my beta readers for feedback too- you know who you are…

As for a publication date? I’ll lock that in over the next couple of weeks. We still have to come up with a cover, but I’m leaning towards the middle of October- all things going well. We’ll pop it up on Amazon during September for pre-orders. It’s taken a few months longer than I would have liked it to take, but the extra time means that the book will be as good as it can be by the time it hits the virtual shelves.

What more can I say other than watch this space!