So anyways, much of my corporate life has involved projects and change management- the two have similar, yet very different skill sets.

It often falls to the Change Manager to communicate and sell the deals and milestones etc that have been agreed with the Project Manager by the business. In other words, Project Managers make sure everyone knows what it is they need to be doing by when, and what could possibly get in the way of them doing it. Change Managers make sure that everyone involved with the project- even those who will be impacted indirectly- know what is changing, why, when and what it means for them…within sufficient time to allow them to process this, make alternative arrangements etc. Clear as mud? Yes, I thought so.

That’s why I was amazed when I dropped in at the shopping centre closest to where I work- the other day. Sure, it was the first day of school holidays- I expected the crowds and the trolleys. There’d been posters up for weeks about minions and school holiday fun. Great.

What was a surprise was that they’d closed all the outdoor seating for the food court, boarding the area up and plastering the doors with one of those “building a better eating experience” signs. They’d also closed the food court toilets and parents room. Yep, on the day school holidays started. This meant the closest loos were downstairs a way away…and anyone with toddlers in the middle of lunch who decide to “go” knows what that means.

As far as project planning goes, this was a rookie mistake, as far as Change Management goes, it was a bigger one. None of us still have any idea about what “building a better eating experience” means, or when we’ll be able to enjoy it, but for now it’s a great excuse to walk and talk instead of sit and eat. 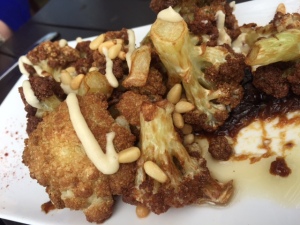 This amazing fried cauliflower with eggplant jam, tahini sauce and pine nuts at Mezze Bar in Rouse Hill. Trust me, the pic does not do it justice. The pork belly and lamb mince we shared was also great- and my friend said the fig cake was super yum- but the cauli was the stand-out.

Mezze Bar used to be Meze Me. The Meze Me people have moved across to Annangrove, but much of the menu has stayed here. Thankfully. Personally, I think it all tastes even better now- although the service is still pretty hit and miss.

What else I ate…

Dumplings. We’ve been having cravings for Taste of Shanghai in Eastwood. Each time we try at least one new thing. This time it was the steamed chicken in chilli oil- essentially drunken chicken doused in chilli. Oh my.

There’s a new Taiwanese place in the strip that I think I’ll come back and try the beef noodle soup at…and a new Vietnamese doing pho that people were queueing for. Always a good sign.

The first Koel bird of the year. These are, I think, a member of the cuckoo family and have a particularly distinctive and irritating call- mainly because they start making it when it’s still dark…which at this time of the year, is very early indeed. They come down from the tropics as the weather warms up, and are one of the first real signs that summer is on its way.

What I’m listening to…

Serial, the podcast. I might be late to the Serial party, but I’m addicted- so much so that I’m finding myself weirdly (and I can’t believe I’m admitting this) resentful that it’s school holidays and the morning commute is easier.

For those who haven’t yet listened, it’s one story- the story of a cold case murder- told over a number of episodes. Like my photo of the cauliflower, trying to tell you about Serial isn’t doing it justice. It’s a story, told in instalments, and told well.

Ok, we haven’t had one of these for a while. Sichuan spicy pork and noodles. This one definitely tasted better than it photographed- and was on the table in about 15 minutes. The link to the recipe is here.

We made the mistake of using gluten free fresh rice noodles (Woolworths was out of my usual brand) and they sort of disintegrated into the dish. Next time around I think we’ll have it with rice. Yes, there will be a next time- this one was voted a midweek keeper.

How was your week?

@adventurespaniel getting into the spirit of an online yoga class. She’s been quite anxious over the last few days wile we’ve been away from home, so obviously she needed the class too!
Always great to catch up with @debbish - even better when it’s #happyhour at @enzosonthebeach Someone (@adventurespaniel ) got all the attention.
Happy milestone birthday to this bloke. So it hasn’t been what we planned (I think we’re at Plan D?) but that is what it is & what better way to spend a birthday than with family (including @adventurespaniel ) in Hervey Bay helping @sarahtracey243 move house. New beginnings. Happy birthday darlin, love you to the moon & beyond. 😘❤️
Now *that’s* what I call a burger. Lunch at @herveybaygeneralstore is always a highlight of any visit to Hervey Bay.
Current view #herveybay
I don’t tend to read twisty psychological thrillers but having just finished one of Sophie Hannah’s Agatha Christie novels, couldn’t resist the premise of this one - and am glad I did. #amreading