So anyways, I got chatting to the guy selling the milk. He was telling me about the coffee beans that he uses in his breakfast milk. They come from Vanuatu, and have been grown in a collective of local producers organised by this Kiwi guy. It was a great story, but a pity that I don’t like either milk or coffee flavoured milk…although hubby said it was good.

Then there was the conversation with the salt man about how each of the salts were harvested, and how you only need a grain or two of the roasted garlic salt, and possibly a few more of the smoked version.

I had never heard of flat iron steak before we went to Aria last week. There they grill it and serve it with watercress, yuzu and soy dressing. The man from Paddock to Plate suggested we roast it more slowly to allow the marbling to melt through.

The goats cheese man had almost sold out by the time we got down there, but the vegie guy had some amazing coloured carrots that would be perfect for the angus beef I’d just bought from the Paddock to Plate guy. Grima’s even had some black radish that I was dying to try. Did you know that a home cure for colds is to scoop out the centre of a black radish, fill it with honey and bake it? True.

The man at the front selling bread boards made from camphor laurel trees (the different tones and textures you get from this wood is remarkable) couldn’t believe it when we told him the local council wouldn’t allow us to remove our camphor laurel.

‘Well, I’ll be…’ said the board man. ‘Camphor Laurel is a weed in most councils. They ask me to take them out.’

We’ve been lucky enough to have a good sized one here at Castle Hill Showground for a number of years now. People come to buy, to eat, to catch up, to walk their dogs. For those couple of hours on a Saturday morning, the traffic and the commutes are forgotten. 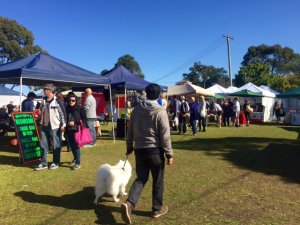 The thing about these markets is they only accept genuine growers or producers. It’s how you can have the conversations that you have. Many of the producers have stayed the same- David, the goats cheese man has been dishing out samples to my daughter since she was in primary school. His wife is the cheese-maker and their cheese is very good- as is the yoghurt…if you can get there before it all sells out.

We always end up spending more than we plan on spending. Yesterday we came home with some incredible sourdough from the baker, a couple of salts from Sydney Salt Company,

some organic nut butters from Loli’s (you have to try her peanut and coconut…or the almond with moroccan spices…), 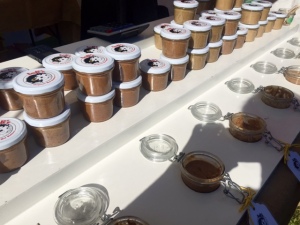 multi-coloured carrots, fresh horseradish (which we grated over the steak) and sweet potatoes from Grima’s, delicate leaves from Darling Mills Farm (be early if you want the micro herbs- they sell quickly), pure pot-set jersey yoghurt from Over The Moon, bags of unwaxed apples from the Batlow apple man, and corned beef (tonights dinner) and the flat iron steak from Paddock to Plate.

Speaking of the beef, we popped it in a marinade of red wine, balsamic vinegar, plenty of garlic and rosemary from the garden, and let it rest for the rest of the day. While the beef was doing its thing on the barbecue, I added another slurp of wine to the marinade and reduced that down to a syrupy glaze. If you want the recipe, I used this one as my guide.

Are you a market type person? Do you have any local farmers markets worth calling out?

Hawkesbury Harvest is on at Castle Hill Showground on the 2nd and 4th Saturday of each month from 8am-12pm. Come for brekky- the egg and bacon rolls are worth getting up for. 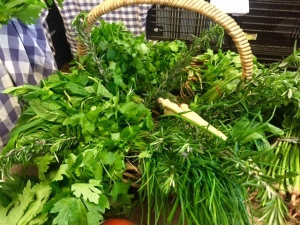 After another day of rain yesterday we have this.
Time hopping back to when we did the Routeburn Track. #timeflies
Good morning. For the first time in I can’t remember it was comfortable to walk... humidity not too bad at all. Happy Monday!
Okay, so my pastry isn’t the prettiest, but this was a fine looking - and tasting - treacle tart.
A change of beach today to attempt some writing. The views were good, the words not so...
Wow it’s been a long week, but we’ve got there! #mooloolababeach

Reading this one on this mornings flight. Thanks for the recommendation @inthehartland #bookstagram #charlottelucas #austenfan
Oh my goodness I shouldn’t be reading this on the train #allthefeels #bookstagram
Okay, so my pastry isn’t the prettiest, but this was a fine looking - and tasting - treacle tart.
A new batch of granola out of the oven. This one smells (& tastes) of orange & is from the @fortnums cookbook. It’s seriously the best granola ever... #bigcall #granola #justaddyoghurt #sunshinecoastfoodie
Just finished this one - reliably good. In other news on @bookdyer_y recommendation I’ve downloaded my first audio book - the Michelle Obama one. I rarely read biographies so this is waaaaay out of genre for me... Listened to the first hour yesterday while I was walking & so far it’s fabulous. What’s everyone else reading this weekend? #bookstagram
The words came very slowly today - painfully so. Some days are, I know, like that.
×
%d bloggers like this: