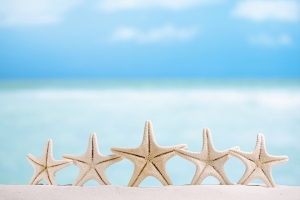 So anyways, as I write this, the rain is pouring down- both outside and through what must be a cracked roof tile in our ensuite. Yes- I’m sighing…for both the thought of what I know will be a lengthy commute this morning and the thought of asking hubby to get up on the roof at some stage to look for whatever is making the rain come in.

The week in the partition has been manic- it always is on those weeks when my boss is away- and the days since Tuesday have been wet…which means I haven’t been getting my lunchtime walk in.

There have been bright spots- there always are. Here are 5:

The lady who created the Bay kids

I told you the other week about the little statues along Homebush Bay? On the one day I did get out for a walk, I got chatting to their creator. She was down there giving them a final polish and, in her words, saying goodbye in her own way.

The come to visit text

I was just about to leave work the other afternoon when it came through and brightened my day: the ‘would you like a weekend visitor in July’ text from a dear friend. I’m so looking forward it.

I had lunch with a girlfriend the other day who had been cleaning out her accessories and thought I might like a look- rings, earrings, necklaces. I’ve rescued a few and given them a new and grateful home, and have donated some money to her favourite rescue charities to say thank you.

It’s such a lovely idea that I’m thinking of doing the same with all my scrapbook and craft equipment that has been sitting neglected and sad in the end room for the last five years.

I’ve been procrasti-watching this week. I’m tired and struggling with my manuscript, so have binge watched season 2 of Wonderland…a show I decided I’d had enough of halfway through Season 1. After an absence, I’m deciding that I like it again.

Anyways, in one episode Miranda is leaving food out for the homeless man sleeping in the door to her studio. Tom tells her that what she’s doing is pointless- that the problem is much bigger than one man sleeping in a doorway.

Then Maggie reminds him of the story about two guys walking along the beach and seeing all these starfish above the water line and dying. One guy starts throwing them back. The other tells him to stop- the problem is too big, he says, you can’t save them all. The starfish chucker turns to him and says, perhaps…but I can save this one.

I’d never heard this story before.

Then, when I was online at Starfish Animal Rescue (see above- you can find them on Facebook) I read the same lovely story. It’s why they do what they do- so they can make a difference to even a few animals. It matters.

I saw it when I was talking a staffing issue over with a colleague. I looked up, and there it was, bold and bright in the late afternoon steel grey sky. Concord Hospital was also glistening as if it had been touched up with gold. It was one of those perfect moments where the light was fleetingly perfect.

The photo from my office window was crap, but I instagrammed it anyway.

The rain started again soon after, but for that few minutes, the rainbow ruled.

What was the bright spot in your week? I’d love to know…

Saturday morning. The markets are done, and now I’m sitting down with a pot of tea & the rewrite for The Cafe On Beach Road. The perfect start to the day.
Is it just me or has this week been weird? The Aussies start today so this part of the sunny coast - Maroochydore, Alex, Mooloolaba- is the place to be for the next week. The biggest event since the Commonwealth Games. #mooloolababeach
There are nights when only spicy soup and veggies will do the trick. Tonight was one of those nights. @lifesgoodcurrypastes Tom Yum paste, some poached chicken breast & veg - perfect.
I inhaled the TV series but haven’t read any of the books... until now. #bookstagram #audiblebooks
Good morning. #mooloolababeach
Not only is it Wednesday- my 4th favourite day of the week, but it’s looking pretty good weather wise. #mooloolababeach