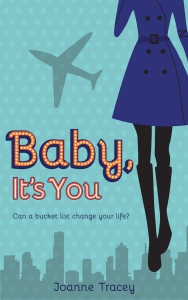 So, without further ado:

What’s with the title?

The title comes from a song by Promises back in about 1979. It had shuffled onto the playlist when I was faffing about with working titles.

In case you’re interested, the link to the clip is here. I won’t blame you if you haven’t heard of it- Promises were one of those one hit wonder bands that the 70s and 80s were so great at producing.

I’ve only recently listened closely enough to the lyrics to really understand them. Back then, instead of hearing ‘adding dramatics to help love grow,’ I though he was singing ‘adding pneumatics…’ something that I thought was a reference to his rather well-endowed and suspension-challenged offsider. I still don’t quite get the line that (I think) goes something like ‘your heart is your life- cut it carefully with your knife…’ Really?

Anyways, it’s a great song, with some artful use of smoke in the video.

What genre is it?

Chick lit, commercial women’s fiction, romantic comedy…you get the idea. Yep, it’s written by a woman, with the expectation that the prime market will be other women- although I’d love guys to turn a page or two.

I wanted to write what I like to read- something that I’d pick up to read on a plane, in the bath, in bed, after a busy mind-numbingly, eye-glazingly day on spread-sheets. Something that would take me into someone else’s life- and something where I just knew there’d be a happy ending. Is that a spoiler alert?

Through the magic of the keyboard, we’ll also take a trip to Bali…there’s another spoiler alert.

But what’s it about?

The one list Em doesn’t have is a bucket list. She doesn’t need one –her life is predictable, her job is satisfactory, and even though she has a thing about men who wind up back with the woman they were rebounding from, there’ll always be her friends, Suse and Booth, to see her through. So when Em inherits a bucket list in the pocket of a vintage blue suede coat, it triggers a series of events that turn everything upside down.

Baby, It’s You is a story about friendship, romance, and loyalty. It’s also a little about daggy pop songs. Mostly though, it’s about change.

You know that story about how a butterfly flapping it’s wings in the Congo can cause chaos somewhere thousands of miles away…or something like that? Well, that’s exactly what happened to Emily Porter. A simple, seemingly innocuous Bright Idea over the usual amount of drinks in the usual pub on a usual Friday night kicked off a series of changes that transformed the lives of Emily and her two friends- Josh Booth and Suse Turner- completely.