This is the segment where I attempt to replicate, reproduce, make something similar to a dish that we’ve had out or on a take away menu, using the cookbooks in my shelf.

This was our dish of the night when we ate at Spirit House the other week. (yes, there’s a post on its way). A luscious, creamy, silky smooth soup, rich with the taste of galangal, lemongrass, kaffir lime, and a hint of chilli. Decadent and divine.

At Spirit House, it was served as a starter in a teapot and poured into small cups over thin slices of salmon.

Here at Chez Tracey, there’s no time for faffing about and styling- it’s all about getting the meal on the table. We served it as a main meal, ladled over bowls containing cooked rice noodles, shredded chicken and some shitake mushrooms I’d cooked in the broth.

I’d spent some time on Australia Day replenishing my home-made chicken stocks. I usually use a whole chook, taking the it out when cooked and stripping the meat off, before tossing the bones back in to finish the stock.

This gives me a few litres of chicken stock, plus some shredded chicken meat in the freezer for salads and sandwiches…or Spirit House Coconut Soup.

I used a Spirit House recipe from the first book- Spirit House- Thai Cooking. This has to be the single most used book in my shelf. Without exception.

The recipe I used as my base was Tom Kha Gai- Chicken Galangal Soup. And, as luck would have it, it’s available here, for free, on the Spirit House website.

The quantities here will serve 4 as a generous starter, but we’re greedier than that and wanted it to be a main meal, so doubled the chicken stock and added a can of coconut cream.

Because I wanted it to look like the one we had the other week, I strained the soup after all the flavours had bubbled away and infused. I returned it to the pan and added the mushrooms at that point. If I hadn’t been using cooked chicken, I would have added that then too.

Although the ingredients list looks daunting, this is an easy soup to make and quick to put together. It’s one of those where you get a whole bang of flavour for a little bit of effort.

The verdict? A big “this is a keeper” all round.

As for me, it took me back to that little place on the beach at Phuket where I had this for lunch (unstrained) most days.

And on a rainy night in Sydney after a crappy day, a little imagined sunshine was a good thing. 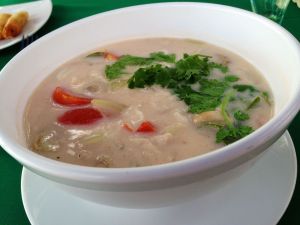 The weather cleared the further south we came. Called in at @thebootinn_mappleborough for lunch (tomato soup) & then @jollynicefarmshop between Cirencester & Stroud for ice cream & supplies. It was this farm shop that was the inspiration back in 2015 for Wish You Were Here…todays ice cream of choice was damson. Finally made it to Tetbury & our home for the next 4 nights. #traceysontour #jollynicefarmshop #tetbury
It was rainy & gloomy as we left the Peak District this morning & was a feral drive down to the Cotswolds. I think we were both glad Grant was doing the driving. Before we left we called in for a photo of Chatsworth House aka Pemberley. Maybe next time we’ll have time to visit.
Mostly a traveling day today but caught up with @wodwo_music this arvo, a visit to this incredible bookshop (completely overwhelming in an all my bookshop dreams come true sort of way) & in Matlock Bath the biggest portion of haddock, chips & mushy peas I’ve seen. For the record my attempt at it was dismal indeed. Off to The Cotswolds tomorrow. #traceysontour #cromford #scarthinbooks #matlockbath
Well, that’s a wrap on Grassington & the Yorkshire Dales - & we’ve loved every mini of it. Next stop Bakewell in the Peak District for an overnight stay before heading into The Cotswolds. #traceysontour #grassington #yorkshiredales
So we had plans today to spend our last day in Yorkshire seeing more of the amazing scenery & walking some more. Instead we’ve both hit that wall that you sometimes hit when you’re on holidays. So instead we wandered the RHS gardens just outside of Harrogate for ages, stopped for a pint of Black Sheep brewed not far from here in Masham, called in at the oldest sweet shop in the world at Pateley Bridge (they have the Guinness World record to prove it) & took one last look at the fabulous scenery in these parts. Tomorrow we begin heading south, but without a doubt we’ll be back to this part of the country again some day. Thank you Yorkshire, you’ve been great. #traceysontour #yorkshiredales #loveyorkshire #rhsharlowcarr
Today was all about 2 things: a pilgrimage to Bronte land aka Haworth and Sunday lunch. Tick and tick. #haworth #traceysontour #bronteparsonage