So anyways, my holiday is over and I’m back at work today. Cue sympathy.

The worst part of a holiday isn’t just the going back to work- and yes, I am grateful a have a good job, and yes, I already have something else planned that the good job is allowing me to pay for, and I’m grateful for that too- it’s just the post holiday restlessness settling in. It lasts about two weeks on average.

I look at pretty well every place we go through the eyes of ‘could I live here?’

My friend, who knows me well, and has suffered through many such post holiday restless rants, must have been holding the phone away from his ears until I said:

‘You don’t understand. Even the birds sound better. I think I could live there for a few months.’

I tried to explain it:

‘In Sydney, they’re loud and showy, like everyone has to talk over the top of everyone else. Out here, they sound more musical. It’s more gentle.’

It’s true. I’m writing this at 6am before work and there’s a squadron of cockatoos flying overhead as I do so. They’ll come back at least a few times before they settle for the morning. Everything else has to squark louder. It’s almost as if the birds are mimicking society. Maybe it’s the bird version of real estate and money talk….I’ve noticed they’re not as look at me loud in Melbourne either…just saying.

It could be that the hotel we chose to stay at in Armidale was out of town a little- just a few kms. Far enough out to have no noise at all other than the birds, the horses, a cow or three, a distant rooster. Country noises. But close enough to easily run into town for dinner- at the White Bull (don’t be confused by the red bull in the logo) in Marsh St…in case you’re interested….they do a great steak in the restaurant and a mean parmi in the bistro. 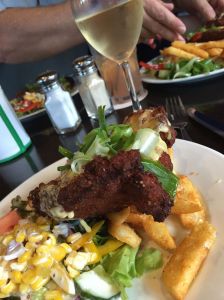 Mostly road-trip stops are just a bed to sleep, but for the first time on a road-trip, we all woke in Armidale feeling completely rested. 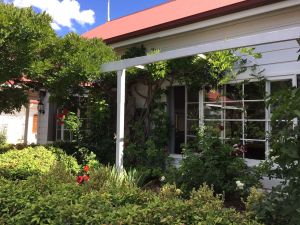 I happen to think it was all of the above- and the dawn chorus. It really does sound better in the country. 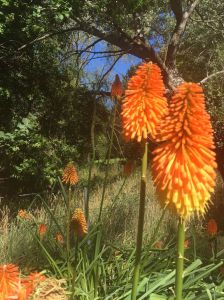 We stayed overnight both ways at Moore Park Inn…

Bunya nuts must be in season #bushfood
It was a tale of 2 walks this morning - pretty pink sunrise at the beginning of the walk & some really cool cloud action at the end. #mooloolababeach
Misty rain for our walk this morning & all very grey out there… #mooloolababeach
It’s been a bumpy start to 2022, and after a week away, today really feels like it’s back to sort of normal routine. February will, I suspect, be the new January.
Snapper tacos with waffle fries… and a view.
Caramelised orange cheesecake. Thanks @hepspics for the recipe… #bakestagram