I don’t spend nearly as much time as I’d like in our garden- and that’s only about ¼ of the time that I need to. As a result, September always means at least a few full days in there de-triffiding. Sometimes I swear the weeds are so long they could grow legs and walk out of there- if I trained them to do so.

Maybe that’s where John Wyndham got the idea for The Day of the Triffids? He was sipping a cup of tea on his back step one morning after a particularly good spell of weed growing weather and declared ‘by gum, these buggers could grow legs and walk!’

Anyways, in the absence of my own blossom trees, I coveted others. 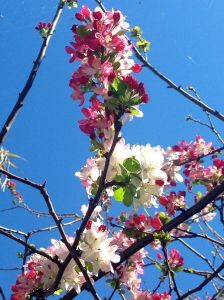 September, as well as being about weeds, was also about lunches.

I made a rash declaration in September about Sunday lunch and how we were going to use it to try somewhere different each week, or at least a couple of times a month. I put rules around it about re-visiting and everything. ‘I’ll blog it,’ I declared. ‘It’ll be fun.’ We managed three, I blogged none.

Been there, done that, by the water.

A repeat favourite. The pan-seared dumplings are incredible. 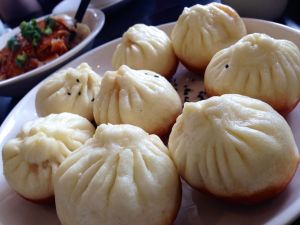 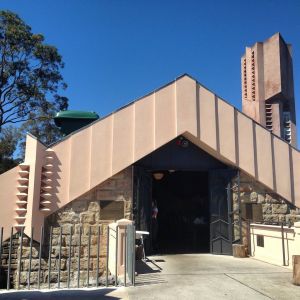 Now, this place was worth writing about…which, of course, I didn’t get around to doing. My fried chicken and herb salad was finger licking yummo.

I resisted the urge to sample their cornets, but hubby and Miss 16 shared one and declared it to be good. I guess it was.

Another repeat lunch spot, but well worth the effort. The outlook on a good day, and this was a good day, is pretty great. Sadly, I was fighting the battery on my (now ex) iPhone, so no photos of lunch.

Phone re-charged we wandered down to the fortifications at Middle Head after lunch. If you want the history of the place, check this out. Otherwise, the view is incredible.

What I attempted to cook 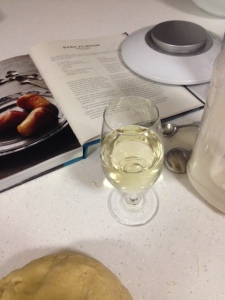 Rum Baba- and the first attempt was an abject failure. I wrote about it here. 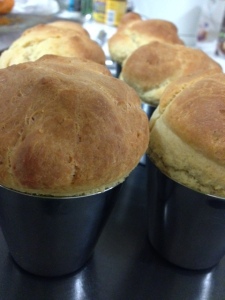 I also attempted to re-create something I’ve never tasted in real life- egg foo yong/young. My BMF raves about it. Apparently there’s this place he goes to in KL to get it and it’s amazing and you’ll never be able to make it and yada yada yada. Anyways, I googled a couple of recipes and had a go at it. Essentially it’s a combo of Chinese barbecued pork and Chinese omelette of sorts. I think I’ll be wanting to try the real thing before I have another shot at it.

What I blogged about

I finally added a few more posts to my A-Z series. There was U (for Ubud), W (for writer), and X (for always marking the spot..ok for X factor).

There was also a self-indulgent excuse to use a few pics from the archive and pop something up about what escape means to me.

Fabulous catch up with Sue & Deb... thanks for the laughs. @womenlivingwellafter50 @debs__world
Current read... What are you reading right now? #bookstagram
A different view of the surf club this morning - from the beach... good morning from a wet & windy sunny coast.
Pikelets that are like crumpets. These ones feature in Escape To Curlew Cottage & the recipe is now on BKD. Link in bio.#brookfordkitchendiaries #escapetocurlewcottage #pikelets #crumpets #bakestagram #bakersofinstagram #procrastibaking #buttermakesitbetter
These 2 pics were taken at the same time - the first looking across to Mt Coolum & the 2nd to Point Cartwright. Loving the cloud action. #mooloolababeach
February reading round-up - a mixed bag in terms of genre & so hard to pic a fave last month. By the finest of margins it would have to be Hamnet- with Molly Dean a close second. For reviews on each head to the link in my bio and choose “on my bookshelf”. #bookstagram