I haven’t done one of these since…since I can’t remember! Anyways, here goes:

I’ve hung them outside in the pergola and at night they give a really cool glow…but not much light.

They come in packs of four from Bunnings, so we bought two.

Thankfully they survived the storm the other night.

What I’m crushing a little on 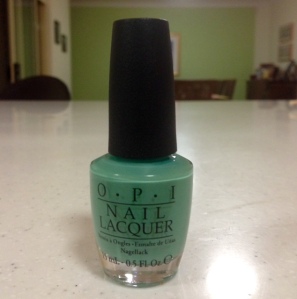 This green nail polish by OPI.

This is the sixth instalment in the Rowland Sinclair series, and with every one, I think I fall a little more for Rowly.

Sulari has an amazing way of weaving the events and politics of pre world war 2 Australia through the stories. As well as being a great read, through Rowly and the adventures of his little band of communists and depraved artistics, history is brought to life.

What I’m changing my mind on

This week I’m painting our main bedroom. Although the rest of the house has had its squarage considerably reduced by multiple coats of paint over the last fifteen years, our bedroom hasn’t been redone since the early 2000’s…although hubby swears it was only done a couple of years ago.

Although I’ve always loved the jacaranda blue, it’s time to go. Along with the Monet print we bought together back in 1989… and the Laura Ashley lampshades that looked so good in 1993.

Rather than the green in the sample tin (which, incidentally, I love) I’ve decided to go with something surprisingly neutral (for me), which has hubby concerned on a number of fronts.

With the help of my new Annabel Langbein cookbook, that is…chipotle peppers in adobe sauce.

This little blighters are too good.

I used them to add a little something more to this smoky beans recipe, but they also went into the most incredible Smoked Chilli Caesar Dressing.

Oh, you want the recipe?

1 cup cream (I didn’t say it was healthy)

Heat the oil in a heavy frypan and toss the garlic in to sizzle for a few seconds. Stir in everything else, bring to a boil then remove it from heat and set aside to cool.

This has cream in it, so will only last a few days in the fridge, but man it’s good!