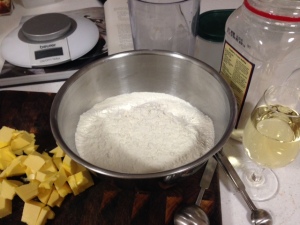 Already one #failure from this afternoons baking. Wine is needed to rescue the latest attempt…and loud music. Could be eating at midnight.

As it turned out, attempt no. 2 was a resounding success and we were at the table by 7.30pm.

What was I making? Rum Babas, or Baba Al Rhum. essentially these are light and airy yeasty cakes immersed in a rum based syrup.

It’s one of my husband’s favourite desserts and given that I was preparing his favourite meal (beef wellington), I figured I’d go the whole way. Cue applause, hallelujah chorus and dancing girls. #wifeoftheyear #domesticdiva #enoughalready

There’s nothing worse than solid babas that are like little nuggets of stale compressed bread, so to maximize my chances of success, I went straight to the master of all things Italian on my bookshelf- Guy Grossi. The book? Recipes From My Mother’s Kitchen.

I’d like to preface what I’m about to say next with this- I have all of Guy’s books, I’ve cooked many recipes from each, and I’ve never yet had a failure…until now.

The sponge part of the recipe had the following basic ingredients:

The only reason I went to Mr Google was because I couldn’t get fresh yeast, so needed to check the conversion rate.

On Taste.com I came across another recipe. It contained the following ingredients:

Did anyone spot the difference? Both recipes had similar methods, resulting in a smooth dough that needed to be popped away for resting. As you do.

Yet, the Guy recipe had 2 cups more milk, 2 more eggs, and double the butter for the same amount of flour. WTF?

I googled some more- other recipes leaned more to the taste.com quantities than the Guy ratios.

But this is Guy, I argued with myself. Guy is never wrong.

Maybe the milk doesn’t all go in at the start, I wondered, reading the recipe all the way through again. Nope. In it goes. Did I read the quantities incorrectly, I wondered? Nope.

But this is Guy, I told myself again. Who can you trust if you can’t trust Guy?

So I made it. Exactly the way it said to in the book…and after 6 minutes of beating, instead of having a smooth dough, I had a smooth batter- about pancake consistency.

Into the bin it went.

Back to google I went.

Round 2 was made using the taste.com recipe, plus Guy’s syrup…and they were the best babas I’ve ever done.

The thing is, Guy is one of my culinary heroes….so my question is:

Have you ever been let down by a hero? Did it take wine, daggy pop music or something else to get over the disappointment?