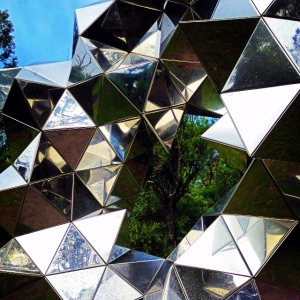 So anyways, I entrusted my beloved Nikon DSLR to Miss 16. I had to- two weeks in Hong Kong and China…she needed to take pics she’d remember forever. Besides, she’s never so much as lost a school hat.

That meant that I had my phone to rely on. What could go wrong?

The apple two year curse is what.

My phone decided midway through that it didn’t like taking photos. In fact, it didn’t like it so much that it turned itself off. Then when it would deign to come back on, it would do so with 20% battery gone. At one point I went from 64% to 25% to red-line off… and back on with 47%. Whatevs.

McClelland Sculpture Park in Langwarrin, on the Mornington Peninsula. Not that far from Frankston (a 10min drive from the station), and 40 mins out from Melbourne. 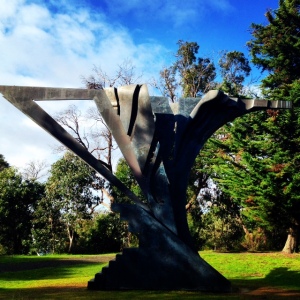 My friend had seen it featured on one of those late afternoon weekend shows that features things to do that you wouldn’t have otherwise thought about doing. McClelland Sculpture Park is one of those things.

What is it? Firstly it’s a gallery that hosts both permanent and temporary exhibitions. 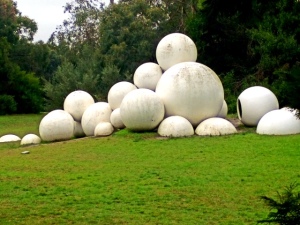 It was established in the early 70s by a bequest from the late Annie May McClelland. Annie and her brother Harry moved here in 1912. Harry was an artist and Annie a poet, and by the 20’s the pair had established themselves as, so the blurb on the website says, “the centre for a bohemian group of creative personalities.” 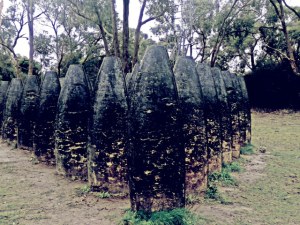 Montsalvat, in Eltham, and (Heather, please note) also on my list of Places To Visit In And Around Melbourne, has a similar history- although was established about 20 years later. 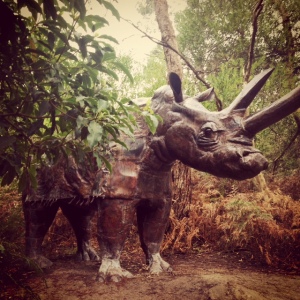 Anyways, the bequest was made to honour Harry’s memory, to showcase the work of Australian artists, and provide a place for community art groups to meet and work. Harry’s Studio is still in the grounds.

As for the sculptures? I’m the first to admit that there’s a lot I don’t understand about sculptures and installations, but I can throw around the odd existentialist comment. The grounds are, however, a delight to wander- even on a cold, wintry day. There’s a surprise 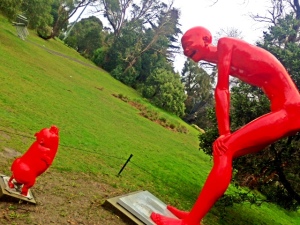 and a flash of colour around every turn. 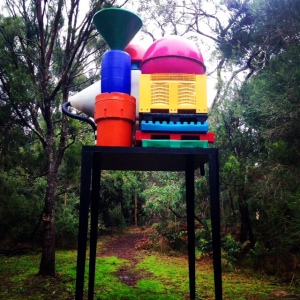 Sadly, my photos don’t do it justice.

My favourite pieces? The reflective prisms at the top of this piece, these really cool multi tensile wires that held a heap of balls that I didn’t get a photo of, and these pipes (below) that played music almost as if the wind was breathing across them. Oh and this house that was pitch dark (and I mean completely pitch black) where you feel your way around until it opens into a room where the roof is lit by stars. I didn’t get a photo of that either… 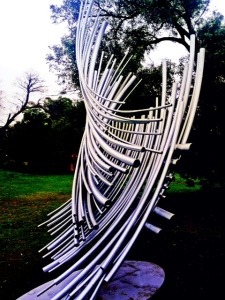 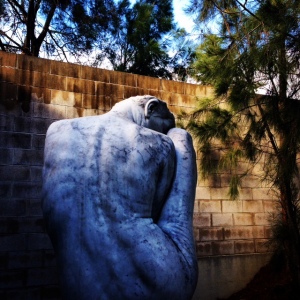 We drove, but you can catch the train to Frankston. From the station it’s either a 10min taxi ride, or a bus trip with a 15 min walk tacked on the end.

The details are here.

The rain came down with serious intention just as we finished strolling the gardens.

The cafe inside the gallery space is light, bright and airy- yet also a welcome shelter on a manky winter day. By the time that we finished lunch, the sun was out again. Aaaaah Melbourne.

The food? Some hits, some misses. My beans and chicken was hearty and satisfying, with a decent amount of spice and well cooked chicken. My friend’s salad also looked great. The pasta of the day, however, was entree sized and had been dolloped onto a soup plate without a lot of care. Given that was the only slightly flat point in an otherwise great day, I reckon it was forgivable.

Nothing. But you are encouraged to leave a donation if you wish…It’s worth it. 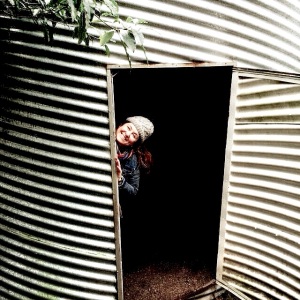