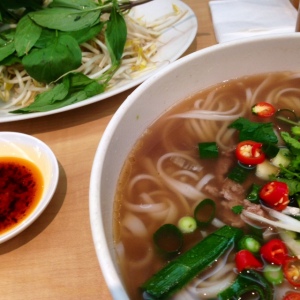 Every culture has one- a dish that makes you feel so good inside, it can’t possibly be wrong. A dish that tastes like it should be good for you, that it should be able to beat anything that ails you into submission. Folk food, family food, street food.

Pho, (pronounced “fuh” for the uninitiated) is one such dish.

It sounds simple enough- flat rice noodles, thinly sliced raw beef, a few herbs and spring onions, and then an aromatic boiling broth is poured over the lot to cook the meat. How hard could it be? But all pho is not created equal.

Good pho has hidden depths of flavor, enhanced by the chilli, lemon, basil and whatever you add to it. It’s the noodle soup of the Gods, and just by eating it you’re treating your body as a temple. 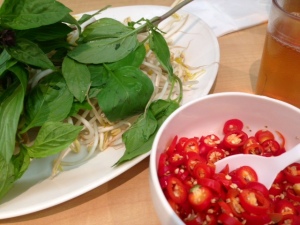 Then there’s ordinary pho. The broth is thin and watery, the beef clumpy, the texture fatty and shallow. Although it might trick you into thinking you’ve satisfied the craving, essentially it’s pho without soul.

The pho at Pho An is possibly the best pho I’ve had in Sydney. It satisfies the craving you don’t even know that you’ve had.

At Pho An, the star of the show is pho- there is nothing else on the menu.

You can choose between beef (rare, brisket or tendons) or chicken- with or without organs and other bits.

The service is quick, the tables are wipe down and the ambience is noisy…but the soup? The soup is divine.

If you want to have a shot at making your own at home, here’s a post I wrote earlier… If you know of a better pho in Sydney, please tell me- I’ll add it to the list to try!

Pho An- 27 Greenfield Parade, Bankstown. Although Pho An is open from 7am, lunchtimes are always busy, so be prepared to queue- especially on a weekend. While you’re there, check out the Vietnamese grocers, butchers and bakers- this part of Chapel Road has been re-labelled Saigon Place for a reason. 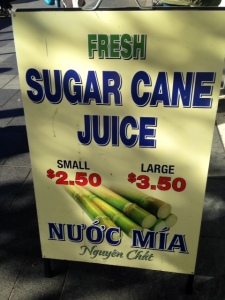 Homeward bound. Reckon it’ll rain?
And here’s the finished product - pear belle Helene… great job Deb, Sue & Donna. Another successful book club baking adventure.
It’s book club baking day - where we prepare a dish inspired by the last Bronte book we read. The book is Villette and the dish is pears belle Helene. Here’s one I prepared earlier. The recipe is on BKD - links in the bio. #bookclubbaking #inspiredbybronte
No sign of this morning’s promised rain… so far.
I’m currently running about 2000 words behind target but back at one of my fave places to write @thedockherveybay_ And I just found myself writing one of my mother’s favourite sayings: “no blood, no noise.” Thanks Mum. @janice_lyons42
Back at the old rental one last time to finish the cleanup before handing the keys back. I’m going to miss visiting this view, but glad to see the back of the unit.