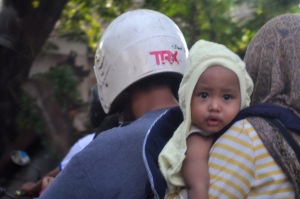 We’ve seen bikes carrying a driver, a passenger and a 3m ladder.

We’ve seen bikes where the passenger is balancing on the back with one very large tyre through each arm.

We’ve seen bikes carrying just the driver with a 2m length of building wood balanced on his shoulder.

In Legian one night we saw three girls in short, tight skirts squeeze onto a single bike- the one with the most room to move acting as driver with the other two sitting side saddle- each facing opposite ways.

Another night we saw a woman with six dogs (I counted them) on board. Four on the step through part of the bike, and one in each of the bags slung across her shoulders.

Motorbikes are an integral part of Balinese society, and an efficient way of getting through the chaos that is the traffic.

As a tourist, renting a bike gives you a sense of freedom and independence- and the ability to see more of the island at your own pace… the whole path less travelled thing. It’s fun, it’s a cheap way to travel, and, out of the built up tourist areas, there’s not a huge amount on the roads. Besides, how cool is it, Dude, to have the wind in your helmet less hair and and just chill?

We might laugh at the sights we see- and I’ve written about them before, here– but there’s a serious side to it.

A recent-ish article in an Aussie newspaper said that “each day, at least three people die in crashes in Bali and 150 accident victims turn up, on average, to Bali’s main hospital, Sanglah, for treatment. On some days, the doctors at Sanglah tend to 300 injured people.”

We saw the after effects of some of these in the departure lounge at the airport the other night.

Our driver, Made, was telling us more about it. He’d know- at the age of 6, he lost his mother in a motorbike accident.

The problem is, he said, that the Aussies who get on bikes in Bali, don’t ride them at home- some have never ridden a bike before at all. Although these are not powerful motorbikes, Bali is still not the place to learn to ride one.

Many of the touts who hire the bikes for ridiculously small amounts of money (compared to home), don’t care whether you have an international driving permit (explicitly covering motorbikes), whether you wear a helmet or not, whether you’ve ridden a bike before, or whether you intend being sober when you do…or if you’re sober when you hire it.

The thing is, if you are injured when riding your bike, your travel insurance mightn’t cover you. If you’re a passenger, you probably won’t be covered. It’s worth checking.

The other thing is, even if the accident wasn’t your fault, as the foreigner, you’ll probably be required to pay for any damage- that’s not covered by travel insurance either.

My point? If you are going to hire a bike in Bali- and you know you probably want to- following some basic common sense will help you get around, and get you back to the airport in one piece.

The title of this post is from Redgum’s I’ve Been To Bali Too. Watch it in all its early 80’s glory, here.