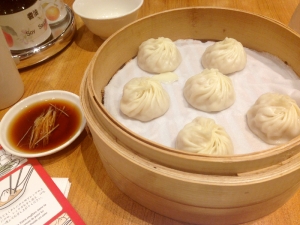 You all know the story of a man named Jed? A poor mountain man who barely kept his family fed? Then one day when shooting for some food, up from the ground flowed some bubbling crude…oil, that is…

Today’s story also is about oil, but the man involved is named Bingyi Yang (or is it the other way around? Don’t write to me…) who fled to Taiwan in the late 1940s as a result of the Chinese Civil War.

Ten years later, just as poor old Bingyi thought things were on the up and up, the store he was working for (selling cooking oil) closed and he found himself without a job.

Now, those who read my post the other day on Taiwan eats, might have an idea in which direction this story is going…

So anyways, Bingyi and his wife decide to open their own store- also selling cooking oil. They named it Din Tai Fung. Now you know where I’m going?

As luck would have it, the bottom fell out of the cooking oil business- something about the tinned stuff being easier and therefore more popular.

Bingyi though, is a resourceful bloke, and his wife a fine cook- so they start selling xiao long bao on the side.

These aren’t just any run of the mill xiao long bao, there’s something special about these, and by the mid 80’s the steamed bun business had taken over from the cooking oil game…and the first Din Tai Fung restaurant was opened in Xinyi Rd, Taipei.

Inspirational yes? So are the steamed buns.

Speaking of which, what are they?

We call them soupy dumplings, but this isn’t strictly correct- although they are soupy, and they are like dumplings. Translated literally they are small steam basket buns.

Mostly filled with minced pork, a good xiao long bao should be small enough to fit in the mouth in one go, have a smooth, thin dough that is translucent enough to hint at the pork goodness inside, but not so fine that a mis-placed chopstick can render disappointment as the juices run into the bottom of the steamer instead of into your mouth.

A mistake made by new players is to try and jam the morsels into your mouth without thinking. The soup inside is scalding hot- so think of what that will do to the roof of your mouth…or your shirt as it spurts out.

So, here’s my guide to enjoying xiao long bao in all of their wondrous glory- without incurring injury to yourself or your clothes…