So I’ve been camping over the weekend.

It’s probably a little more like glamping- you know, glamorous camping…except that it’s not really camping and it’s definitely not glamorous.

With my brother and his family we were out in the middle of a few hundred acre property in a locality called Eucumbene. Eucumbene is in the south of NSW near the Snowy Mountains, about a 40 minute drive from Cooma and the same from Jindabyne. This is trout fishing country- not that we do the fishing thing… 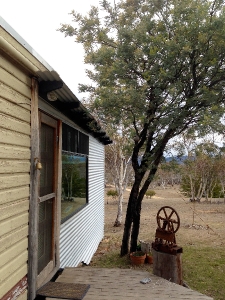 We stay in what used to be workers cabins from the Snowy Mountains Hydro Scheme. We sleep in sleeping bags, huddling against the drafts coming through from the walls that don’t quite meet and windows that don’t quite shut. I use the term “sleep” loosely- as I don’t…sleep, that is. This in itself is fortunate as it means I can get up regularly to stretch my back out and top the fire up.

Although there’s a kitchen, to save on washing up, we challenge ourselves to cook outside on the campfire- our meals prepared in cast iron camp ovens, the fire providing coals and warmth against the sub zero temperatures.

There’s no internet or cell phone reception, no TV, and no access to the conveniences that we usually take for granted. It’s rejuvenating and refreshing and re-invigorating…and a few other “re” words.

During the day we take drives up the mountain to find snow for the kids to play in, rivers for the 4 wheel drives to do their thing in, and country to explore. We take walks with the kids to look for kangaroos, practice our whip cracking skills, pop popcorn and toast marshmallows on the fire… and we prepare food for the campfire- strategizing over how many coals are required for a curry versus a pudding or bread.

We share the cooking. My brother made pizzas for Friday lunch- cooked in the camp oven. We compared them against a separate batch from the conventional oven and declared them to have much more flavor. As for his famous roast lamb- well, there’s a reason it’s talked about so highly in our family.

Last year I had a disaster with a slow cooked stew that ended up being a fast cooked lump of charcoal. This year things would be different.

I adapted my Kapitan Chicken for the camp oven. Having no access to mortar and pestle etc, I pounded up my spice base before we left.

We heated the camp oven on very hot coals and removed it to soften the onions in some oil, and then cooked off the spice paste for a few minutes, stirring all the while and protecting our eyes from the smoke from the fire, In went the chicken and the coconut cream (I popped in an extra tin), and the pot went back onto the coals, with more on the lid.

We checked it and stirred it up a few times, but 40 minutes later, we had a curry that somehow tasted better than it usually does.  My husband is still speculating on the reason for the difference.

The real surprise and fist pump moment for the weekend was my chocolate self saucing pudding- cooked in the coals. It was the perfect mix of rich chocolate, soft cake, crusty top and fudgy sauce. I’ve been making this pudding since I was a teenager- but never before in a cast iron pot. Here’s the recipe.

What you need for the cake

What you need for the sauce

What you do with it

Linking up with IBOT on Essentially Jess