On a clear day you can see forever- well, at least as far as the Blue Mountains…which today, as a result of the clear skies and wind, are as blue as blue can be.

Some days dawn so clear and blue that you have no choice but to embark on an adventure.

I could keep the clichés coming, but the sad fact is that none of it is, a cliché, that is. It’s simply a perfect 22C winters day in Sydney…and what is a girl to do during school holidays on such a day in Sydney? Get out of town, that’s what.

Where I live, in North West Sydney, getting out of town isn’t that difficult- as long as you’re heading North…or West…

I remembered this historic pub we’d been to years before out in the Macdonald Valley, beside the river.

The pub’s been there since 1836, made from sandstone that was hewn by convict hands. They always say that, don’t they- “hewn” when it comes to anything that convicts worked on. And they worked a lot in this area. In the 1820’s chain gangs of convicts were used to build what is now known as the Great North Road- the road that links the fertile Hunter Valley with Wisemans ferry and then through Dural, into Sydney.

Anyways, the town in the Macdonald Valley is St Albans, and the historic pub is the Settlers Arms.

Last time we were here it was a Sunday in early Spring. The outside tables near the vegie garden were full and a live band played music.

This time it was a Thursday in winter. 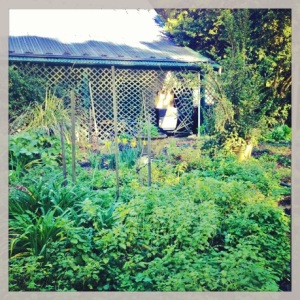 The vegie garden was still there, but the seats were still wet with dew.

Inside, the heater was on, but the open fires were not- I’d been hoping for a blazing fire.

No one had vacuumed from the night before, so the rugs under the tables were full of crumbs. My Mum got a cloth from the kitchen and wiped down the tables.

The blackboard menu was limited, but the food when it arrived was plentiful and well cooked.

My parents loved their home-made pie with mash and peas so much that they asked the cook for her recipe. Apparently the secret is thyme….and a good dash of port and red wine.

Miss 15 and I opted for the steak sandwich and chips. As I said, the menu is basic. And the soft drink comes out of bottles- those big party pack bottles- which is sort of cute.

As we ate the cat came and sat beside us…so did the pink dog. Yes, someone had dyed the dog pink.

Afterwards we walked along the riverbank and up the hill into town. Mum got told off by some upstart 10 year old kid for using the slippery dip- it’s not for old people, she said.

St Albans is just over 90kms from Sydney CBD. Allow about 90 minutes from the north of Sydney.

From Sydney: take the M2 to the Pennant Hills Rd exit and follow the signs to Dural. Then follow Old Northern Rd to Wisemans Ferry.  Wisemans Ferry is about 40kms from Dural.

From Parramatta/Windsor: Follow Windsor Rd as far as McGraths Hill, turn into Pitt Town Rd and follow the signs to Wisemans Ferry.

At Wisemans Ferry you have two choices- both routes are 20kms to St Albans.

Both ferries take all vehicles, are free and run 7 days a week. Each is closed for one 2 hour period each month- on the first Tuesday and Thursday respectively- and don’t run when the river is in flood.

I drive an SUV, so we took the rough road on the way there, and the smooth on the way home.

From the Central Coast: Turn off the highway at Peats Ridge and wind your way through via Mangrove Mountain. When you get to Wisemans Ferry (don’t take the ferry), the road becomes Settlers Rd. I haven’t done this run, but my brother tells me it involves a bit of back tracking.

Make your way to Wollombi and follow the signs to Bucketty. There’s a gravel road that 35kms later brings you out at the front door of the pub. This used to be the old Cobb & Co route, and I don’t think much has been done to the road since then.

There’s the pub, of course. There are also picnic grounds across the road, by the river, with relatively good barbecue facilities. In town there’s a little café, the name of which escapes me, up the hill.

Back in Wisemans Ferry, there are plenty of options and extensive picnic grounds by the river- with plenty of room for kids to kick a footy around in.

So 27 years ago today on a beautiful autumn day in Canberra (and Canberra does beautiful autumn days so well) we did the I do thing. Aside from the fact that I was 20 kgs lighter & my hair was a lot darker, it truly seems like it was yesterday. 27 years married, 33 years together & still my favourite person to travel with. Especially when he brings home flowers.
The sky is painted this morning… let’s hear it for Friday! #mooloolababeach
So it’s our wedding anniversary tomorrow so we celebrated tonight - at @marketbistro_ I’ve been wanting to eat here since they opened & it was well worth the wait. #sunshinecoast #sunshinecoadtfoodie #sunshinecoasteats
It’s getting cooler and staying darker for longer, but this is absolutely worth walking early for #mooloolababeach
Chicken Pho. I slaved over this stock all day. Was it worth it? Absolutely.
6am Wednesday and waiting for coffee. Not a bad start to the day… #mooloolababeach