I missed yesterday- Friday, that is.

I had a funeral to go to, and, even though it wasn’t my loss, some tears to cry for my friend and their family. Too young, too loved and too cared for to go so soon. I guess that’s always the way.

Anyways, the afternoon was full of running around and doing the back to normal thing and before I knew it, Friday had gone- without a Friday Five.

Given that it’s Friday somewhere, though, I figure that I’m still ok.

This week I’ve been working on a beginners astrology course that I’ll be running in August via Skype. I’ve also been working on an astrology ebook that I hope to self publish within the next couple of months and editing (again) the manuscript draft I completed last November.

On top of that I have an idea that just won’t go away, so I’m having my own mini nanowrimo and attempting to smash out 50,000 words of a first draft this June.

I’m being kept accountable with the help of a few friends on the Writers Forum that I belong to, and there’s a whole host of people in the RWA (Romance Writers Australia) doing it too.

I’m a pantser rather than a plotter. This means that I generally have no idea what’s going to happen until it does. I write scenes as they come to me, and generally get a draft out quickly. Because of this I need an app that doesn’t mean that I’m cutting and pasting whole rafts of words through larger rafts of words.

So I use Scrivener. For these reasons… there just happens to be five.

I need this. I set myself an imposed deadline and tend to stick to it. I pop this into the targets, decide how many days a week I’m going to write, and hey presto I have a daily word count.

The little line graph starts off red, moves to amber, and becomes greener as you get closer to achieving your daily target. You can even set it to alert you along the way.

As I said, I tend to write in scenes.

Scrivener allows you to pop a synopsis of each scene, sort of like a post it sticker. This means that when I’m looking for something, a passage, whatever, I can just browse the synopsis. In Scrivener, this is available in a corkboard view (below), document view or outline view.

More importantly, you can drag scenes, and chapters around- before or after other scenes. There’s no cutting and pasting, no risking losing chunks of words.

You can even drag scenes down to a deleted scenes folder at the bottom of the page, so you can easily retrieve it if you change your mind later.

Ever had to trawl through thousands of words trying to remember what you named the best friends husband? How old her kids are? Their names? Don’t stress it. There’s a handy little character section especially for that.

I sometimes find a celebrity who I think could look like my character and attach that image. I’ll also attach images of outfits that they might wear to work, or coffee, or on a date.

Similar to character settings, I find it helpful to pop in a pic or two. 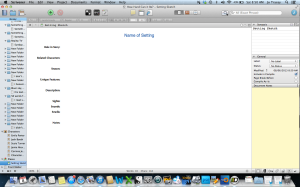 Then when you’re done, the whole thing compiles into a word doc (or pdf or whatever) at the touch of a command.

Scrivener isn’t just for novels- there’s a format for all types of long form non fiction as well. I use Scrivener for mac (purchased through the app store), but there’s also a version for windows users. Google it.

Welcome to Grassington in the Yorkshire Dales. It’s best known for being Darrowby in All Creatures Great & Small & for using a lot of Union Jack bunting. #traceysontour #grassington #bunting #yorkshiredales
Relocation day from Westow to the Yorkshire Dales and Grassington, our home for the next few nights. The scenery was stunning - sparsely, bleakly beautiful up around Tan Hill & more pastoral around Kettlewell. I’d go as far as saying the drives from Tan Hill to Hawes and then from Hawes through to Grassington were possibly the most scenic roads we’ve driven. Narrow & twisty I was glad Grant was driving. Lunch was up at Tan Hill Inn - the highest inn in the UK & also the one that hit the news just before Christmas last year when the pub was snowed in for days. Also stopped at the Wensleydale creamery in Hawes for some local cheese. #traceysontour #tanhillinn #tanhill #buttertubspass #hawes
It was off to the seaside today with a visit to Whitby first on the agenda. I think it was @jamesmartinchef who said something like how Whitby is like the Mediterranean- but cold…& very often wet (sorry if I’ve misquoted you James) but it’s completely wonderful. If you’re in Whitby you have to go to the Magpie for fish & chips, but we didn’t do that today. Nor did we walk up (or down) the 199 steps (it, like a lot of Whitby, is part faith, part Dracula). Lunch today was in Robin Hood’s Bay which probably has nothing at all to do with Robin Hood but has a very colourful history of smuggling & a very steep walk down - & back up. The weather set in while we were there so the rest of the planned days touring was abandoned in favour of the fire and a book back in Westow. #traceysontour #whitby #robinhoodsbay
Pt 2… back on the road & heading away from the coast through the moors to Goathland - famous for being Hogwarts & in Heartbeat (which you’re all probably too young to remember). Today there were 2 bus loads that turned up just before us, so it was instead the town where sheep wander down the Main Street & stare down drivers. On to Pickering and Thornton-le-Dale which is pumpkin mad at the moment & rightly deserves its reputation of being one of the prettiest villages in Yorkshire. #traceysontour #thorntonledale
Loved this water-powered tramway to get people back & forward from the pier… otherwise it’s a super steep climb #saltburnbythesea #traceysontour
A driving day today. Began down the road at Kirkham Priory, onto Helmsley - a fabulous market town - and through to Stockton-on-Tees… before very quickly heading for the coast and Saltburn-by-the-Sea. The offshore wind farms fascinated me… as did the surf school 🥶 #traceysontour #yorkshire #kirkhampriory #helmsley #saltburnbythesea