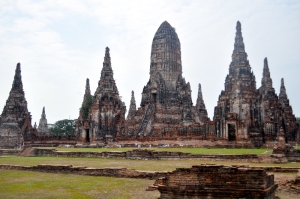 It sounds like, I don’t know, like some place exotic, palatial, a place where spices and silks were traded. It sounds like it would have been a place where majestic barges paraded up the river with flags and banners proclaiming the arrival of merchants and royalty.

Apparently it was glittering, and golden, with temples full of buddhas and palaces full of treasure.

These days, after 300 years (give or take a century or so) of floods and pillaging, all that’s left are ruins…and scaffolds- there’s a huge restoration project happening.

Now, we saw more temples and more buddhas (both accidental and intentional) in this area- which is a lot larger than you might think) than even I could take, so pace yourself with a leisurely boat ride in between. 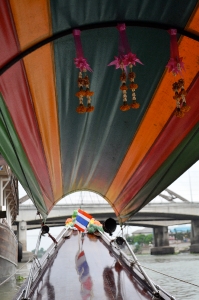 The most photographed image in Ayuthaya is this one of the Buddha in the trees. I made up a pretty good story about how it got there and how the tree roots grew around it, but no one really knows for sure.

As for the rest of these photos? I’m not even going to try and tell you the details- they were taken in Ayuthaya- that’s pretty well as far as the details go.

Something about the elephants

This is an interesting one and, for me, a controversial issue.

I have this issue with seeing majestic animals doing demeaning things ie the whole wiggle your bum to disco music thing.

The sad and terribly tragic fact is, these days, these mighty animals have lost much of their habitat and much of their purpose, yet elephants helped to make Thailand what it is today.

These great animals need respect…and assistance. The Ayuthaya Elephant Palace is a non profit organisation that buys sick, abused or condemned animals. They also run elephant rides through the ruins. It’s an amazing way to see them- both the ruins and the elephants. 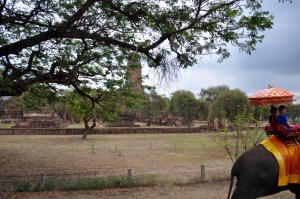 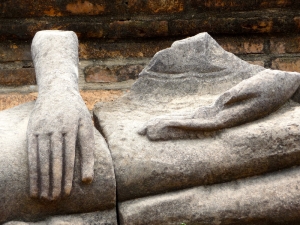 You can catch a bus or a train from Bangkok. Once there you can hire a tuk tuk or a bicycle to get around.

We jumped on a tour from Bangkok- there are heaps, so ask your hotel guest services.

Alternatively, take a private tour with a company like Tour with Tong.  This would have been our preferred option- except that I was too slack and didn’t organise it before we left Australia, and wasn’t prepared to pay the data roaming and wifi costs once there!

So it’s our wedding anniversary tomorrow so we celebrated tonight - at @marketbistro_ I’ve been wanting to eat here since they opened & it was well worth the wait. #sunshinecoast #sunshinecoadtfoodie #sunshinecoasteats
It’s getting cooler and staying darker for longer, but this is absolutely worth walking early for #mooloolababeach
Chicken Pho. I slaved over this stock all day. Was it worth it? Absolutely.
6am Wednesday and waiting for coffee. Not a bad start to the day… #mooloolababeach
I had a really disappointing reading month in April. May, however, is off to a great start with this one. I think I’ve found my reading mojo again. @alli_sinclair #bookstagram
Thanks to a public holiday it’s back to work Tuesday…and, after a week in Hervey Bay, it’s nice to be back home. #mooloolababeach