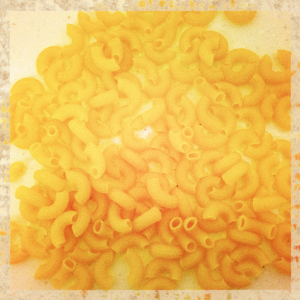 I have a thing about mac cheese.

To me, it’s the ultimate in luxuriously, indulgent comfort food. All of that wonderfully cheesy pasta…unfortunately, these days, mac cheese gets in the way of the numbers that I want to be seeing on the scales, so is a rare indulgence- as it probably should be.

When I really want to over indulge I go for the cheffy quattro formaggio souffled mac cheese, but this one is probably the healthiest of all the macaroni recipes I regularly use- if “healthy” is an adjective one can apply to Macaroni Cheese!

Anyways, this is one of Miss T’s most requested winter dinners. In fact if I make it on Tuesday nights, I normally have enough left to cover off Wednesdays when Mr T is at football “training”.

The quantities are fairly loose- I don’t tend to weigh stuff out. You can if you want.

I normally make this recipe with low fat milk- for 2 reasons: it is usually all I have in the fridge and also, but naturally more importantly, it makes me feel so much more virtuous, if, indeed one can feel virtuous making macaroni cheese!

Likewise, I tend to just use a packet of bacon- even though the pancetta does give a far superior taste and is worth the trip to the deli section if you have time or are planning ahead.  I’m not great at planning ahead.

I’m experimenting with the no lactose thing at the moment, so have also been substituting the dairy element with a lactose free substitute. The taste is different, but if you’re used to the lactose free thing, you won’t notice any different.

If you really want to kid along with the faux healthy thing, serve it with a green salad- it helps cut through the cheese- but we prefer to eat it out of noodle bowls on our laps in front of the telly with a glass of red.

What you do with it:

If you’re gluten free simply substitute the macaroni for your usual gluten free pasta and omit the breadcrumbs.