The girl in the deckchair four spaces along has the largest piece of belly button jewellery I’ve seen.

The guy on the deckchair beside me is one seriously artfully inked piece of French eye candy. I know it’s artful, because there’s a lot of it on display, and I know he’s French because he was beside me at the beer counter and I heard him speak.

It makes a change from some of the other sights. I don’t reckon I’ve seen more exposed bum cheeks on a single beach in my life…I suspect that in some corners of the world the g-banger is making a comeback- and body size, shape or age is no impediment.

This is also a place where body confidence doesn’t seem to be an issue- anything seems to go…and generally does.

I don’t agree. Well, except for the nicer elsewhere part- there’s always a nicer beach to be discovered and everyone has their favourite Phuket beach- Surin, Bang Tao, Kamala…but I wasn’t paying for the tuk tuks to get me there. 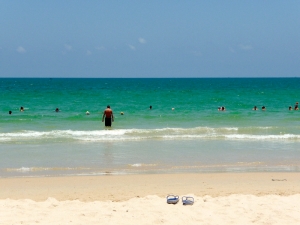 We’re at the Northern end of the beach, where the sea- and the sand- is clearer than it is further down in the main tourist area. Up here it’s perfect.

Up here the hawkers don’t hassle as hard- they simply walk on by with a smile, stopping only if encouraged.

There’s the women with their armfuls of clothes and hopeful “shopping?”

There’s the henna tattoo sellers and the whistle man with his wooden bird whistles and his tuneless “da da dadada da da.”

On the food front someone walks by with cobs of corn, someone else has ice cream and my favourite- the one we call the lalala man- sings as he walks “are you hungry? Everybody say no thankyou…” He’s selling little trays of spring rolls and crumbed prawns. I bought some from him yesterday- just because he was my favourite of the hawkers.

Over laying all of this is the action in the water- the jet skis, the banana boats, the paragliding. The paragliding is incredible to watch. I did it solo in Penang, but this is different. You’re strapped in, and as you launch into the air, the “tandem” clambers up the ropes and hangs there in the air with you, wrapping his legs around your waist to ensure a smooth landing. Miss T did it yesterday.

The jet skis are also popular. Miss T and Mr T hired one for 30 minutes and proceeded to flip each other into the ocean. She was driving.

Speaking of the ocean, it’s the same colour as my toenails- a turquoise that’s very different to the sapphire blue we get on the East Coast of Australia.

There’s none of that shock as the first wave of cool hits your tummy, just a gentle warmth that you simply ease into.

And at the end of the day, there’s the magnificent sunsets…and happy hour at the beach cafe!

All of which leads me into the Patong Beach how much edition of the Friday Five. 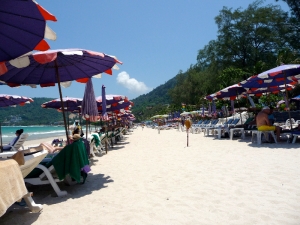 On Patong these cost 100BHT each- for as long as you stay there. The deckchair guys will sweep down the sand and check that your umbrellas are still providing the right amount of shade.

Don’t bother trying to negotiate, the prices are fixed.

These are the same as the blackboard advertised “madicures”. It’ll cost you 200BHT. You can get massages, henna and hair braids from these guys too.

I found coconuts the best thirst quencher in this unrelenting heat….at least until it was reasonably late enough to have a beer!

On the beach a cold coconut will cost 40BHT and a beer 70BHT.

Jet skis will cost you 1500BHT for 30 mins. Paragliding costs the same- if you opt for the bigger chute. This is worth paying a few extra baht as you get a higher and wider ride. 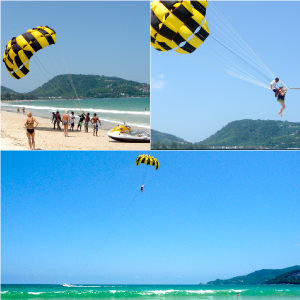 We had lunch most days at the little café on the beach. A tom kha hai (spiced coconut soup with chicken) will cost 150BHT, tom yum 200BHT, pad thai 150BHT.

Another option is the street carts. One lady dishes out noodles by the plateful at about 70-90-BHT a plate or BBQ chicken or fish for not a lot more. She has some picnic blankets set up around raised tables, so you can sit on the ground and eat thai style. My knees are too bad for that… Anyways, although it’s certainly not pretty, the food is fresh and good. 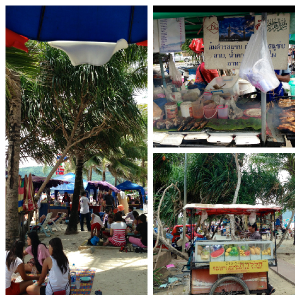 There’s a kebab van that seems to do great trade, but I wasn’t game enough to try. 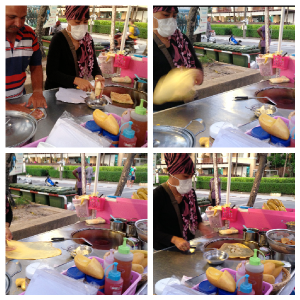 Our favourite was the banana pancake lady. 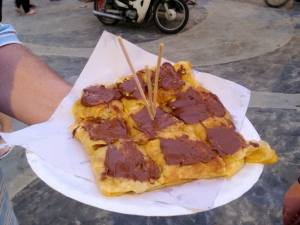