No Bangkok visit would be complete without some. I suppose…I’m not a big shopper.

So, a run down of the main events around Siam Square…

My husband loves this place…but he likes shopping…

The best way of describing MBK is to say that it’s like a huge market, but divided into floors instead of outside spaces- and therefore with air-conditioning.

What I do like about spaces like this is that they’re organised- all the electronics and communications people in one section (4th floor), all the “handcrafts” and statue people in another, all the cheap singlets and backpacks in yet another…and fake brands just about everywhere. 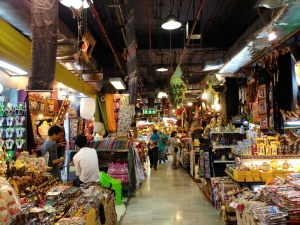 To top it all off is a huge food hall…and I mean huge. This place isn’t pretty, but the food is authentic (sometimes scarily so), good- and cheap. Meals here will set you back just a couple of dollars, and with the turnover here the quality is generally fine.

Directly across the road, and accessible by a sky walkway, is Siam Discovery Centre.

There’s a Madame Tussaud’s in here, but we couldn’t be bothered. I could, however, be bothered with the Bobbi Brown concept store. The upper floors are pretty well all lifestyle stores.

Accessible right next door by yet another covered walkway is Siam Center.

Apparently this one has recently been updated. Whatever, there’s some great stores in here- by established brands and emerging designers. That means there are a lot of pop ups.

Miss T was most impressed by the Havaianas concept store (who doesn’t needa  pair of glow in the dark thongs?) and the Magnun dessert store. Seriously? Yes.

We ate quite often in the food hall. Substantially prettier than MBK, with great variety and a low-ish price tag. An extremely good pad thai would set you back about 80bht,

Hainanese chicken 85bht and papaya salad 70bht. The three of us were eating well for less than $10 aussie.

Across the square is the jewel in the Siam shopping crown- the mighty Siam Paragon.

This centre is home to a high end department store and more glossy brands than are imaginable. You know the sort- the press your nose against the window, names dahling, names.

The centre connects to Siam Skytrain station, there’s an aquarium in the basement- South East Asia’s largest- and a food hall on the ground floor.

Speaking of which, most food halls in Bangkok shopping centres operate on a no cash system. You buy a “credit card” loaded up with the amount you think you’ll be spending and exchange this for your food. When you’re done, you can get the cash back or top it up for the next time.

Given that Songkran meant that many family run restaurants were closed for almost the whole time we were in Bangkok, we found food halls a good, tasty alternative- and the ones around Siam Square are clean, cheap and good quality.

Just 10 minutes walk down the road was the mighty Central World, and just a couple of train stops away Patpong Night Markets….in fact, any number of markets- but I’m so not going there!

We stayed at the centrally located Novotel Siam Square- just 5 minutes walk via the skytrain station to Siam Paragon.

Some pics from last nights dinner at @spicersclovellyestate Very good indeed….
Even though his birthday isn’t for another week, the festival of Grant has begun with a weekend away at this lovely spot - just half an hour or so away in the hinterland. @spicersclovellyestate
Cheers from @spicersclovellyestate
I might never have tried a peanut butter & jelly sandwich, but I have now baked peanut butter & jam cookies. Recipe by @adamliaw #bakestagram
I might never cook from this, but this op shop find by the Cornwall @womensinstitute is a real piece of social history.
6am and despite the grey skies there’s plenty of activity on the beach. Other than a few annoying chores it’s a scheduled writing day for me. Here’s to Friday & a great weekend. #mooloolababeach