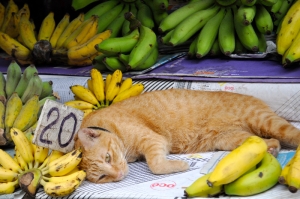 When travelling in Asia some things hold true:

That’s why I booked our foodie walking tour through “old Bangkok” for our first morning in Bangkok. I figured it would be the best way to get our bearings.

All we had to bring was our appetite and an open mind.

Interestingly we had already tried (and in some cases cooked) most of the dishes that we sampled- with some notable exceptions involving offally bits. Eeeeuw…but I’m keeping an open mind!

Anyways, most tasted somehow different to that we have regularly in Australia- the green curry uses tiny flavourful pea aubergines where we would use courgette, and the tom yum had a depth of flavour beyond anything I’ve tasted before…but I’m getting ahead of myself.

So, Olive, our guide was to meet us at Saphan Taksin skytrain station at 9.30am.  How hard could it be? As it turned out, not hard at all. Bangkok’s skytrain network is well marked and easy to understand, so 30baht (about $1AUD*) and 20 minutes later we’re wandering the hot and humid streets of Bangrak with 5 other intrepid souls.

Now, we’ve had (what we call) hanging duck countless times. This tasted different. The skin was just as crispy, the meat just as tender, but it was definitely sweeter. Olive explained that Thais add sweetness to most dishes- it’s all about the all important spicy, sweet, salt and sour balance.

After the duck, the owner brought out other parts of the duck. Yep, you guessed right- the bits we wouldn’t normally eat. I tried a little, some others tried a little, Miss T screwed her nose up and my husband tried it all. What can I say? The man was born in Scotland- his national dish is a sheep pluck with oatmeal served in a sheep stomach and washed down with copious amounts of whisky- presumably invented to get rid of the taste of haggis.

Then the rain came down. Hard. In sheets.

Rain like that called for another unscheduled stop. This time for real red curry fish cakes.

A Muslim restaurant is our next stop for murtabak, a rather greasy mussaman curry, a green curry sauce, and brains cooked in some sort of curry and spice. There was also okra. I tried a teeny bit of the brains, but I don’t do okra. It’s slimy. 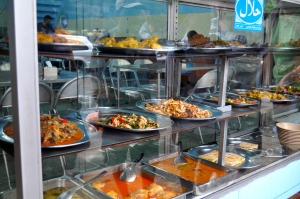 On the other hand I’ve loved murtabak ever since I tried it from a street cart in Little India on my first visit to Singapore many years ago. It’s sort of like a toasted sandwich made with flaky naan (or is it roti?) and filled with…whatever. This one was vegetarian and I dipped it into the curry sauce.

Even though we were only trying tastes, by now our tummies were groaning so Olive interrupted our food journey for a Buddhist temple- my first accidental Buddha of the trip.

Back to the food and into a nondescript little alley for what was the best tom yum soup I’ve ever tasted.

And I mean ever. It was a memorable tom yum moment.

Thankfully our next stop was a bakery (PanLee bakery) for some sweet treats. I say thankfully because I don’t do sweets and it gave me a break! Here we tried a sweet tea with condensed milk and a Thai style green custard bun. I took a deep breath instead. 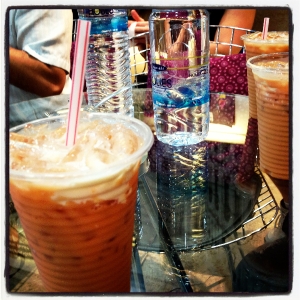 After a long walk up Silom Road through the business area and what was the original expat residences, our final stop was a place called Kallaprapruek for Thai red curry sauce, followed by a scoop of cooling coconut or tamarind sorbet.

Then it was a walk to the nearest skytrain station (Surasak) and back to where we started…for a cooling swim.

Historic Bangrak Food Tasting and Culture Tour is operated by Bangkok Food Tours. They also run walking tours around Chinatown and foodie tours of the Floating Markets and Ayutthaya.

No special fitness levels are required- this is easy street walking, but wear comfortable shoes, cool clothes and be prepared for rain during the rainy season.

None of these dishes look pretty and the restaurants are definitely not what you’d be used to- but that’s the point.

Tours run daily- meeting at 9.35am and finishing at around 1pm. The itinerary changes depending on seasonality and, in our case, some closures due to Songkran. 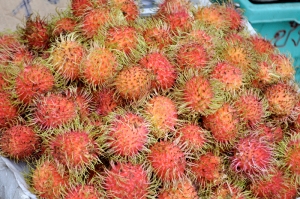 Grains and greens salad. It’s gotta be good for you... right? #brookfordkitchendiaries
Good morning.... #mooloolababeach
Homemade prawn Tom Yum soup for lunch thanks to Tom Yum paste from @lifesgoodcurrypastes Healthy & tasty.
We had one of those thunderstorms last night where this morning everyone is talking about that one massive thunderclap. More forecast for today... love those late afternoon after a really hot day storms. #mooloolababeach
Another hot one on the way. At 5am the humidity was 95%. Eeeuw. #mooloolababeach #februaryinqueensland #hatethehumidity
A little bit of Monday morning serenity. Now exhale. You’re welcome.