A group of teenage boys approached the vehicle where it was stopped at the lights, lifted their weapons to their shoulders and threw with all of their strength.

Through the open sides of the tuk tuk stationed at the red lights.

Then they went back for the re-load. It was our turn. My laughter died away.

The traffic lights changed to green. We were safe…for now. But by the time we’d hit a wall of immoveable Bangkok traffic and bailed to walk the rest of the way we’d been hit by similar gangs at least three times. Maybe four. I’d stopped counting. 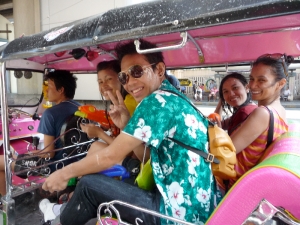 Most were teenagers. Some were younger, some older. Organised gangs with weapons and ammunition at the ready and wide smiles on their faces.

Some mobile gangs roamed the streets in tuk tuks, ready to blast across the traffic into neighbouring tuk tuks. Guns at the ready and backpacks full of fresh ammunition for easy re-loading.

Their ammunition? Hoses and bins full of water.

The occasion? Songkran- Thai New Year. A state sanctioned 3 day water fight and street party scheduled in the hottest month of the year.

It seemed that no one was safe- well, no one except the elderly, monks, motorbikes and bicycles. These gangs are both respectful and safety conscious.

Hubby and I ended that tuk tuk ride so water logged that my t shirt stuck to every part of me and my cargo pants were dragged downwards by the sheer weight of water they were carrying. My camera and phone were protected by my camera bag, but hubby’s wallet in the back pocket of his shorts didn’t stand a chance. He had been warned. Besides, we were in day 2, it’s not as if we didn’t know what to expect.

‘You encourage them,’ he accused.

He had a point. I loved every minute of it.

I loved the water fights, the crowds (and I usually freak at crowds), and the live music- Thai pop and covers of gangnam style. It was all so….happy….and good natured. And extremely wet.

The music throbbed from the backs of trucks through huge speakers, and from the stages set up in certain spots across town. One stage was set up outside our hotel in Siam Square. The hoses were going the whole time.

The water has a significance. It’s symbolic of cleansing, so the water fights and the splashing of each other is representative of washing away the crap from the old year and leaving a clean body for the new.

In Sanskrit, Songkran means “to pass into,” referring to the movement of the Sun, Moon and planets into a new phase, and therefore the start of a new year.

Originally based around the lunar New Year, ie the Aries New Moon, the dates have now been moved for uniformity and practicality.

Also, while the water festival can go for a couple of weeks in regional areas, it’s limited to just three days in Bangkok- again for very practical reasons. Bangkok is a commercial centre, and turning up to a meeting in wet business attire is so not a good look.

It’s not just about fun- there is a cultural and religious aspect to Songkran. Aside from visiting family and paying respect to ancestors and elders, there are activities that should be performed over each of the three days.

Day 1 is National Elderly Day. This is also when ritual house cleaning takes place, or rod nam dum hua. It’s a little like a symbolic washing clean of any bad luck that’s befallen the house, and those who live in it over the previous year.

Day 2 is National Family Day. This is when families give alms to monks and spend the day together- or at least the morning…the water fights and music start at noon each day.

Day 3 is National Ancestors Day when respect is paid to ancestors.

Throughout the holiday, devout Buddhists also “cleanse” Buddha images with scented water. It’s about bringing prosperity for the new year. There’s a merit making aspect to this, and, in Bangkok, visiting one of the sacred temples is considered good luck. This guarantees mega traffic jams- as we found out with a visit to Wat Phra Kaew on Sunday!

Oh and the stuff that will be gently painted on your face? It’s marly limestone or din sor pong. It’s sold in little bags that look like tiny meringues, pounded up, mixed with water and a splash of fragrance. It’s actually quite cooling.

Songkran is a festival that couldn’t happen in Australia- or probably the UK or the US. Some idiot would get plastered and ruin it…or someone would sue someone for something. Here, it’s good natured, it’s controlled and everyone seems to operate within the boundaries. Here, it’s fun.

Banks, offices, schools, small shops and restaurants will be closed for Songkran to allow people to travel to see their families. Most major shopping malls and attractions remain open, but check websites etc.