When I was a kid we’d spend every 2nd Easter in Sydney.

We did it turn about- Easter in Sydney and Christmas in Tumbarumba one year, and vice versa the next.

The six of us (plus dogs) piling into the kingswood for the road trip from wherever country town we were living at the time.

This meant that every 2nd year we’d go to the Sydney Royal Easter Show. Apparently the Royal bit was decreed by Queen Victoria at some point. Run by the Royal Agricultural Society of NSW (it was a big thing then to have Royal in your name), the Show was when the country came to the city. When it was cool to wear akubras, drizabone jackets, moleskin pants and riding boots.

Anyways, in those days it was held at the old showgrounds in Moore Park- it’s been at Homebush at the Olympic site since 1998. If it rains at Homebush, the paths don’t fill with the overflow from the animal stalls.

As kids there was a ritual around the Show. We’d each be allowed to buy 2 showbags and go on 2 rides. We’d pore over the showbag listing in the Sunday papers for hours to decide which ones had the best real value and which ones were filled with crap we’d never eat or use.

We’d go to all the animal stalls, often stopping for Dad to say hi to breeders from whichever town we were living in. We’d wander through the arts and crafts pavilion and ooh and aaah at the cakes and art on display.

We’d line up and push our way through the farmyard nursery and pat calves and lambs and chickens that were much like the ones we had in our own backyard at home. Then we’d watch the wood-chopping before sitting in the main stands and bet with lollies from our showbags on the outcome of the trots.

We’d stay and watch the main event- the Grand Parade- when all the animals were paraded around the arena.

We hated going on Good Friday because the queues in the showbag pavilion were horrendous and Mum wouldn’t let us eat meat- which meant the usual treats of dagwood dogs and meat pies weren’t allowed. I argued once that dagwood dogs didn’t really have meat in them. She told me that wasn’t the point.

So yesterday I was back at the Show. I took Miss T and my teenage neighbours.

Times have changed- all kids went straight for the fruit salads and corn on the cob (my particular show favourite), and preferred the buttery crumpets (a bargain at 2 for $2) to sugary drinks. Not a dagwood dog was consumed by our little party. My neighbour & I exchanged high fives via text.

We ended the day foot sore, back sore, sunburned and completed knackered…and very happy to be so. 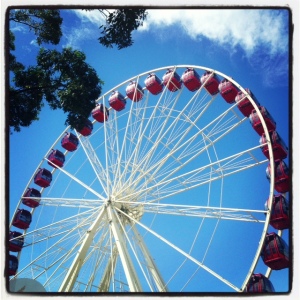 I still love it. It’s a good opportunity for city kids to see and touch baby animals. These days they also show the lifecycle with an egg hatching display.

One poor kid- who was old enough to know better was hysterically crying and hiding behind her mother as the noses of the goat kids snuffled questingly looking for the grain that was on offer. I hope that her mother took her to the food farm and the live dairy so that she can see just where her food comes from.

Follow the animal pawprints on the ground to check out also the poultry, the goats and pigs, sheep and fleeces, the alpacas, and the cattle.

My Nan had been volunteering in the dog show since 1999. It was strange to not look for her this year, but we did wander through and check out the grooming of the poodles…seriously? One pampered pooch had been in the salon the whole of the previous day, and her owners had been up since 4am that morning primping her hair.

I just love these.

Each district in NSW creates a backdrop using the produce from their district. It’s also the best spot to buy toffee apples, cut up fruit salad and little bags of Bega cheese for not a lot of money. Located in the Woolworths Fresh Food Dome. 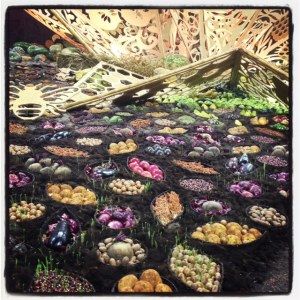 Wow! Some of these people are truly gifted….and possibly have too much time on their hands. The winner ribbons are justly deserved. 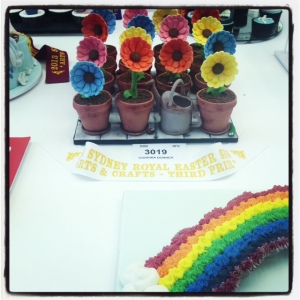 A wander around the art and craft is also worthwhile- I have a particular leaning towards the photography competition. 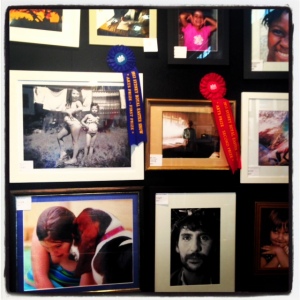 Wood-chopping started from a £25 bet between 2 blokes in a Tasmanian bar back in 1870 over just who could fell a tree the quickest. I wonder just how many Aussie stories start in a similar way- a couple of blokes, a bar and a bet.

Anyways, these days the Sydney Royal is like the Wimbledon of chopping.

I love the ones that twirl you around and take you sky high at amazing speeds before swinging you upside down. The more adrenaline, the better.

Miss T and the 2 Misses S refused to come on with me. They stuck to the flume water rides and a cool spinning fast thing.

Miss T rolled her eyes and reminded me of my wonky back. I ignored her. I think I was the oldest person on there. The girl sitting across from me had her eyes closed the whole time. I screamed the whole time- as you do.

This year the show runs from 21 March- 3 April, 2013. Check out the website to pre-purchase tickets, plan your day and evaluate the relative value of show bags. Don’t forget to download the free app…

The day can be as expensive or as affordable as you like. Rides, showbags and junk food can push the price up a lot- especially if you are a family. The exhibitions and ring events are all free, and you can seriously fill many hours watching and wandering. We saw some families with fist fulls of ride tickets and prams loaded to the brim with show bags- it’s really not necessary.

Homebush isn’t the easiest place to get to, but thankfully at Show time, that changes. Your Showlink ticket includes entry plus public transport. Special show buses even run for those of us in the burbs without access to the rail system. If you simply have to drive, there is paid parking out there. Be warned, it is expensive and it pays to pre-book…especially over the busy Easter weekend.

My sister just sent me through a photo of our old house in Castle Hill… yep, gone. We might have been gone for 5 years, and we knew this was always going to happen, but even so it feels weird to see this. Development…
Yesterday was International Tea Day… so here’s tea & scones in a posh cup. So what if I’m a day late? In other news, it’s still raining. According to the dude with a rain gauge, 135mm from Friday through to 11pm last night… and still it comes down. #wetweekend #overthisrain #teaandscones
It’s pelting down out there today - & autumn has finally arrived. What better way to spend a Saturday than drinking tea, making up soups for the freezer & scones for now. #scones #brookfordkitchendiaries #bkd #teaandscones
Wild & windy out there this morning, but loving the cloud action. Mostly though I’m loving that it’s Friday - even though the weekend forecast isn’t the best. #mooloolababeach
I’ve had a rough couple of weeks for reasons I don’t need to get into here, but was surprised by the delivery of these lovely blooms today from an even lovelier friend. It made my day, my week, & more. 😘 oh, no need to worry - all is ok, it’s just one of those times…
The sun put on quite the show as it was thinking about waking up this morning… #mooloolababeach