I’ve written about my bucket list before- my foodie bucket list here, and some places on my travel wish list here. I wrote here about how I want to immerse myself in some places and the other day on the Facebook astro page I asked readers to nominate an item each from their bucket.

As my 46th birthday approaches, I’ve been thinking a lot about what I’ve done- and what I still want to do. The things I’ve ticked off my bucket list, and the items still in the bucket. As scary as it was to turn 40, the last 6 years have been an amazing ride. I’ve worked flipping hard to do what I’ve done, but have been fortunate to have been able to take the opportunities that have come my way. My gratitude is boundless. Long may it continue.

Over the last six years I’ve snorkelled on a South Pacific island, swam with dolphins,

walked across the Brooklyn Bridge,

gone to the Top of the Rock,

and the Empire State Building.

I’ve watched the Moon rise from behind Mitre Peak on Milford Sound,

marvelled at the colours (and smells) of geo-thermal Rotorua, sat in a hot springs in the middle of a freezing NZ winter, 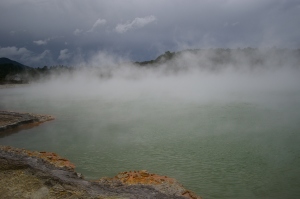 been across the face of Mount Cook in a helicopter and landed on snow on the top of New Zealand.

I’ve had a tattoo, learned astrology, had articles published in magazines and written two (as yet unpublished) fiction manuscripts and 70% of an astrology book.

I’ve relocated offices and supervised renovations in Adelaide, Perth, Melbourne, Sydney, Hong Kong and Brisbane. I’ve dealt with the chaos of losing an operations site to floods in Brisbane and I’ve changed careers- going from the well paid corporate role (that allowed me the luxury of doing everything I’ve done) to struggling creative.

As far as bucket lists go, last year I ticked off having Christmas somewhere other than Australia (Bali), went hot air ballooning (in the Hunter Valley)

and discarded run 10kms without stopping. That’s so not going to happen.

So tell me, what’s at the top of your bucket list?