I have memories as a kid of fishing for eels in the rivers around Bombala- the southern NSW town I was living in.

My Mum was the ringleader. We’d catch (usually only one or two) eels in a night. Mum would despatch them quickly and then we’d cook them- in a tin that used to hold sump oil. At least that’s what I figured it held, because that’s how they tasted. Of oil and mud.

I’d wager a bet that the smoked eels we had the other night at Rata in Queenstown hadn’t been anywhere near a sump oil tin.

The eels in question were served with prosciutto, horseradish mayonnaise and radish and were part of 3 small plates that my friend and I shared for entrée.

The other two plates? A piece of stone containing the tiniest profiteroles ever made, filled with local goats cheese and topped with rata blossom honey;

and a wagyu carpaccio that melted on the tongue.

I ordered the John Dory with aubergine, spring onion, baby leeks and sea grapes- mainly because I wanted to know what sea grapes taste like.

My friend opted for the salmon with grilled sweetcorn, sumac and avocado pesto.

Then I fell off the wagon. I had dessert. I don’t eat dessert. Not usually.

One of the last times that I did was at the now closed Maze at Crown Towers in Melbourne. Josh Emmett (the owner of Rata) was head chef there too. That dessert was truly memorable- a perfectly deconstructed lamington.

This one was just as memorable. I may never eat dessert again.

The dark chocolate mousse cylinder was rolled in dark chocolate powder and topped on a sweep of cherry glaze. Mulled wine granita was spooned onto the mousse and it was accompanied by tiny scoops of the smoothest coconuttiest ice cream in existence. Unfortunately my photo was burry, but if I close my eyes I can taste it.

If you’re going to fall off the wagon, it may as well be in an amazing way.

My friend ordered the raspberry creneaux with cinnamon sable, lemongrass and otago honeycomb. The lemongrass was actually a lemongrass foam that was a pure shot of lemongrass flavour.

Botswana Butchery the following night was wow too, but in a completely different way. 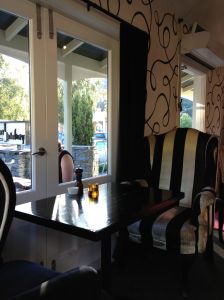 Where Rata was small plates and more subtle tastes, Botswana is bold and in your face. We couldn’t compare the two- which is a good thing.

I chose the Botswana Peking Duck to start- make your own duck pancakes. Just wonderful. My friend had gone for the Ahi Poke- big eye tuna, avocado, mango, chilli and a sesame soy dressing. Mine was lick your fingers yum, while hers was one of those entrees that you savour slowly- to make it last.

Mains were meat- and a lot of it. My friend had duck and pinot noir and I had the pork. Both were served 3 ways and both were impeccably cooked.

My friend finished with a bombe Alaska that sadly wasn’t as impressively lit as it could be due to the long Queenstown days (it’s still light here much later than it is in Sydney). 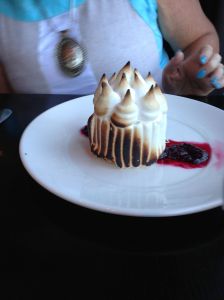 I decided that I couldn’t top the previous nights dessert…ever…so instead had a wedge of blue cheese. 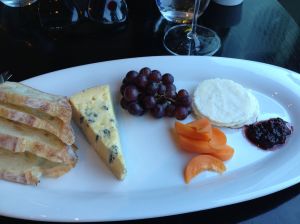