So I’ve been walking a lot today. A lot.

Partly because hubby put his foot down about any sort of jumping off anything, and partly because to fall off the wagon to the extent that I plan to fall off it, requires some compensatory activity. But mostly I’ve been walking a lot today because Lake Wakatipu is so amazingly beautiful. In fact it’s so beautiful that it takes me by surprise. Every time I round a corner or come out of the hotel and the lake and mountains are there it’s as if I’ve never seen them before. 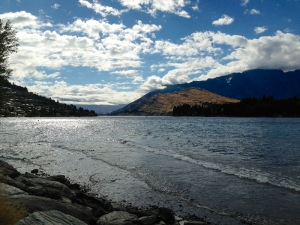 I’ve followed the foreshore path around towards Frankston, and I’ve followed it around the other end. I’ve taken a lot of photos of the same view- because it changes so much.

The Sun rolls it’s way through, lighting different parts of the peaks- almost in time with the breath of the breeze. That in itself is an interesting concept in that the lake rises and falls by up to 20cm every half hour or so, yet it isn’t tidal. It’s as if the lake is breathing.

And that’s all part of the Maori legend of the lake.

Apparently a local ogre named Matau (they had local ogres in those days) was burned to death for taking advantage of the daughter of an important chief.  The resultant fire melted the snow and ice of the surrounding mountains and it all ran into the deep hole where Matau fell – creating Lake Wakatipu. Yet the ogre was so strong that his pulse survives in the daily rise and fall.

As I’ve walked today I’ve also found myself thinking (who knows why) about the eel thing they told us about on the cruise yesterday.

It got me wondering how on earth anyone even thought that an eel from Queenstown would make it to Tonga, breed, die and have the cycle start all over again.

So, some bloke in Tonga must have recognised this eel and says something like, ‘OMG I saw that bugger in Queenstown last summer.’ Then maybe a few weeks later he sees it dead and says to his mate at the pub: ‘hey, I saw this eel the other day who’s come all the way from Queenstown and now he’s dead.’

To which his mate says something like, ‘well, I’ll be buggered. I was just saying the same thing to young Jim the other day.’

So from that they get this story that the eels from Queenstown go to Tonga to die.

Some scientists then heard about it and before you know it, they’ve fitted a GPS monitoring device to an 8 foot eel and tracked him to Tonga…where she breeds and dies.

Maybe there’s a kids book or a Pixar film in this: The Adventures of Eddie the Eel. You could track him as he makes his dangerous journey all the way to Tonga.

The only downer is that there’d be a sad ending, but with the promise of a new generation. Sort of like the Les Miserables of eel stories. Hugh Jackman could play Eddie in the animated version.

Anyways, I’m writing this over a lunch of calamari salad with radish, fennel, walnuts, rocket and carrot, a glass of Cloudy Bay savvy bonk and a side serve of Queenstown blue sky.

I’m determined to hunt down some Bluff oysters before the day is done. 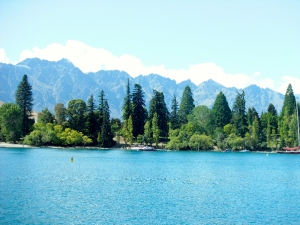