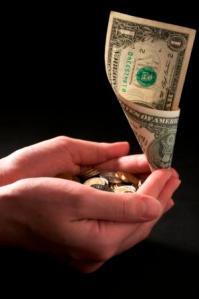 I listen to some indy stuff as well, and a lot of alternative singer/songwriters…I listen to a lot of music. The only stuff I’ve never really been into has been the stadium acts…but that’s beside the point.

What is my point?

My first job…this weeks confession linky post. I actually remembered what I spent my first pay packet on more clearly than I recall the job.

The purchase was a seriously good “dubber”- one of those cassette players that allowed tape to taping. Just perfect for making the mixed tapes I loved. The job was in the accounts department at ACP (Aust Consolidated Press). More of a runner type of role, I’d be in and out of different departments all day. I loved it. I loved seeing how the magazines worked.

A holiday role (between finishing the HSC and starting Uni), I spent pretty well every cent I made- except for the board Mum made me pay…I suspect so that I wouldn’t spend every cent.

It was this job that also started my cookbook addiction. Each week I’d head down to the floor that sold the publications and pick up (at a decent discount) one of the Australian Womens Weekly Cookbooks.

I distinctly recall preparing a proper dinner party for my friends from one of the Dinner Party cookbooks. Dessert was black forest ice cream. I had to coat ice cream balls in dark chocolate and then serve them in this cherry sauce. It seemed so sophisticated. It was 1985…

Throughout Uni I refereed rugby league on the weekends (a woman rugby league referee? Yep, really…) and did the lunchtime shift at one of those shops that sells soft serve ice cream, fresh juices and fruit salads. To this day I avoid fruit salads…and soft serve ice cream…but reckon I could still dunk a cone in chocolate and not have the inside fall out- there’s an art to it.

My first real proper paying job was at Westpac- I moved to Canberra for it…there was a man involved.

I had no savings and had been sleeping on a borrowed camp bed, so with my first pay (after dealing with rent, food and bus fares) I bought a cheap pine bed, a Ken Done doona cover and…you guessed it…an album. It was Pet Shop Boys Actually.

What was your first job?