In fact it’s the sort of smell that seriously you wouldn’t know if it were off or not. Worse than smelly cheese, this doesn’t have the aroma of unwashed wet socks, but rather the stink of decaying shrimp.

And that’s what it’s made from- fermented shrimp with a little salt. It’s then sun-dried and cut into blocks- although some stockists will sell it in a wet form that is also pretty manky.

Thankfully there are now some brands that are sold not only pre-roasted, but pre-cut into individually sealed portion controlled sizes. Trust me, that is a breath of fresh air for the fridge.

So why would we cook with something that smells as gross as this? Simply because it adds that indefinable but absolutely necessary pungency to Malaysian cooking. (It’s also used widely in Thai, Laotian, Indonesian, Singapore and other South East Asian cuisines).

It’s the belacan that gives sambal its potency, and the taste that allows the finished product to take you back to that Hawkers Market in Penang.

Last night we used it in Ayam Kapitan- Kapitan Chicken.

I follow Adam Liaw’s version of this classic, yet deceptively simple Malaysian recipe. Two Asian Kitchens is one of my favourites. 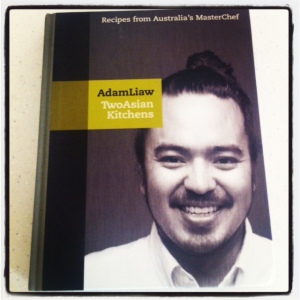 Adam Liaw won Australian Masterchef in 2010. Born in Malaysia to Hainanese and Singaporean parents, the book is a collection of traditional South East Asian food (the old kitchen part), and a new spin on the classics (the new kitchen part).

Last night I couldn’t be faffed jointing a whole chicken (and our supermarket doesn’t sell free range pieces other than drumsticks), so we used skin-less thighs. If you are doing this, I would recommend taking the chicken out after the initial cooking period so that you have the time to develop the sauce in the way it needs to be developed. Then simply toss the chicken pieces back in for the final 10 mins or so.

Anyways, here is the recipe…

5 candlenuts (These are hard to source in Australia, but macadamias are a good substitute. They taste like a combination between a mac and a brazil nut)

Smash this all with your mortar and pestle, or whack it into a food processor and whizz until it is a smooth paste.

1 whole chicken jointed (or 1.5kgs chicken pieces)- I prefer free range chooks that have clucked and scratched their way through their (short) lives.

Putting it all together:

Heat the oil in a large frypan and fry the paste over medium heat until it is brown and fragrant. This will take about 5 minutes, but trust me, you’ll know.

Add the eschalots and chicken pieces and coat in the paste before frying for another couple of minutes.

Add the coconut cream, 100ml water, and cover the pan with a lid. Bring it up to a boil before reducing to a simmer for 20 minutes.

Uncover and simmer for another 5-10minutes- or until the chicken is tender and the sauce has reduced to a dunkable gravy.

Stir in the lime juice and scatter with kaffir lime to serve.

We also serve with plain rice and naan bread- you don’t want to waste any of those wonderful saucey bits.

One of the reasons I love cooking with Asian flavours is the mortar and pestle action- that satisfying thwack as granite hits granite, and the fragrance as lemongrass, ginger, galangal, garlic, chilli, shallots and turmeric are ground together.

It’s these spices that create a taste and a smell that takes you right back to wherever it was that you ate the dish originally. Or at least somewhere South East Asian and humid…with a bucket of Tiger beer on the table.

Any ideas where I am?
Pre road trip brekky at our fave @herveybaygeneralstore This is the brekky quesadillas.
Happy Friday… that’s all.
My birdie friend & I have something to say - it’s wine o clock. You’re welcome.
Not only was I so busy talking this morning that I almost forgot to take a pic, but in getting ready for my Thurs zoom strength session I almost forgot to post it. Here you go.
One final proofread of this manuscript and I’m done. Still finding the occasional typo and rogue full stop here and there. After all of this, any typos that find their way into the finished novel have worked hard to be there. Preorders are up on Amazon- link is in my bio… #thelittlecafebythelake